Welcome to our INSTRUMENT CORNER! This is where you can learn about some of the instruments from all over the world that make up the Vancouver Inter-Cultural Orchestra.

Bansuri ~ a side blown flute made of bamboo, originating from the Indian subcontinent. It is one of the most common instruments in the North Indian or Hindustani classical music tradition. A bansuri is traditionally made from a single hollow shaft of bamboo with six or seven finger holes. Some modern designs come in ivory, fiberglass and various metals. The six-hole instrument covers two and a half octaves of music. The bansuri is typically between 30 centimetres (12 in) and 75 centimetres (30 in) in length, and the thickness of a human thumb. One end is closed, and few centimeters from the closed end is its blow hole. Longer bansuris feature deeper tones and lower pitches. The traditional design features no mechanical keys, and the musician creates the notes he wants by tapping the various finger holes.

Daf ~ a frame drum, traditionally covered with goat skin. In the hands of a professional it is capable of all kinds of intricate rhythms and a variety of timbres by utilizing finger work, closed and open sounds, slaps, and pitch inflections. It may have metal rings attached to the inside of the rim, which create a jingling sound as the skin is struck.

Dan bau ~ a one-string zither native to Vietnam. It is constructed of a long narrow sound box, with a tall curved stem made from water buffalo horn inserted at one end. The single string runs between the sound box and a small wooden gourd attached to the stem. The stem is bent to change the pitch of the string. The player touches the string lightly with the heel of the hand at harmonic-producing nodal points while plucking with the fingers. This produces the dan bau’s characteristic high clear sound.

Dizi ~ a Chinese bamboo flute with a membrane covering one hole to create an increase in resonance and a typical ‘buzzing’ quality. It is really a renaissance flute with a membrane. There are 6 playing holes. The speaking length is determined by blocking the pipe at both ends. There is extra pipe material, which is just esthetic – this extra length does not affect the speaking length. Since the dizi is mainly a diatonic-major-scale instrument, with very few accidentals playable, they come in many different lengths to accommodate the different keys that a piece of music calls for.

Erhu ~ a bowed instrument from China with a long neck and two strings between which a horsehair bow is placed. The strings are tuned to a fifth. The sound box may take different shapes – hexagon, octagon, round, or ellipse – and is covered on one side by snakeskin. The Erhu performs an essential role in Chinese classical music as well as in the folk music tradition. It is held vertically to play – the lefthand plays without a fingerboard, while the right hand holds the bow and plays one string at a time. Note: The gaohu is simply a higher pitched version of the erhu.

Guanzi ~ a cylindrical double reed instrument, related to the western and central Asian duduk, duduki, and bili of Eastern Europe, Persia, Armenia, and Georgia. The original instrument was introduced to China through the Silk Road as the bili in the Sui Dynasty (580-618 AD). This ancient bili was most likely made from bamboo, but Bamboo bili are rare now, found only in a few areas in southern China. The more common wooden guanzi is usually made from a type of rosewood with 7 finger holes and one to two thumb-holes. The ends of the instrument are decorated with metal. The guanzi is made in a range of sizes from approximately 25 to 30 cm in length. Some modern instruments are being made with keys to facilitate ease of playing. The reeds are made from a hard cane. (Source: https://www.asza.com/Instruments/iguan.shtml)

Kamanche ~ four-stringed bowed instrument common in Iran (Persian Music) and in other Middle Eastern and Arabic traditions. It has a resonance box made of hardwood, such as walnut, which is covered with a very thin skin (commonly used membranes include goat, sheep or fish skin). Its wooden bridge is curved to allow for the bowing of separate strings. The neck, also made of a very hard wood, is attached to the resonance box, and has pegs at the top end to tune the strings. At the bottom end there is a spike, which is used to hold the instrument upright as it is played.

Koto ~ a Japanese stringed musical instrument derived from the Chinese zheng, and similar to the Mongolian yatga, the Korean gayageum, and the Vietnamese đàn tranh. The koto is the national instrument of Japan. Koto are about 180 centimetres (71 in) length, and made from kiri wood (Paulownia tomentosa). They have 13 strings that are usually strung over 13 movable bridges along the width of the instrument. There is also a 17-string variant. Players can adjust the string pitches by moving the white bridges before playing. To play the instrument, the strings are plucked using three finger picks (thumb, index finger, and middle finger).

Ney ~ an end-blown flute that figures prominently in Middle Eastern music. The ney has been played continuously for 4,500–5,000 years, making it one of the oldest musical instruments still in use. The Persian ney consists of a hollow cylinder (a piece of hollow cane or giant reed) with five or six finger holes and one thumb hole. Sometimes a brass, horn, or plastic mouthpiece is placed at the top to protect the wood from damage, and to provide a sharper and more durable edge to blow at. A highly skilled ney player can reach more than three octaves, though it is also common to have several “helper” neys to cover different pitch ranges or to facilitate playing technically difficult passages in other dastgahs or maqams.

Oud ~ a short necked fretless lute, known throughout the Arabic world, it typically has 5 double courses of strings tuned in intervals of a perfect fourth. It has a full, warm sound and its fretless neck allows for quarter tones and sliding effects. The European Lute derives directly from the Oud; in fact, the word Lute is derived from El Ud (the Ud).

Pipa ~ a short-necked Chinese lute with a shallow, pear-shaped body, a wooden belly and, sometimes, two crescent-shaped sound holes. The modern pipa has 29 or 31 frets, 6 on the neck and the rest on the body of the instrument. The four strings run from a fastener on the belly to conical tuning pegs in the sides of the bent-back pegbox. Once made of silk, they are today usually made of nylon-wrapped steel. Silk strings were played either with a plectrum or with bare fingers, but steel strings are typically played with finger picks, short plectrums attached to the fingers.

Santur ~ Persian hammered dulcimer whose trapezoid body is made of a hard wood such as walnut or rosewood. It has 72 strings, which are strung over two sets of 9 bridges on either side of the instrument. It is strung 4 strings to a note, and has a diatonic range of just over 3 octaves. Played with 2 wooden mallets.

Sanxian ~ a long necked fretless lute with three strings. In Chinese, “san” means three and “xian” means strings. The resonating body is made of a round wooden box covered with snake skin, just like an erhu. The instrument is played with a plectrum and is widely used to accompany singing.

Sarangi ~  a bowed, short-necked string instrument from the Indian subcontinent, which is used in Punjabi dhadi music and Hindustani classical music. It is said to most resemble the sound of the human voice – able to imitate vocal ornaments such as gamaks (shakes) and meends (sliding movements).

Carved from a single block of tun (red cedar) wood, the sarangi has a box-like shape with three hollow chambers: pet (stomach), chaati (chest) and magaj (brain). It is usually around 2 feet (0.61 m) long and around 6 inches (150 mm) wide. The lower resonance chamber or pet is covered with parchment made out of goat skin on which a strip of thick leather is placed around the waist (and nailed on the back of the chamber) which supports the elephant-shaped bridge that is made of camel or buffalo bone usually (made of ivory or Barasingha bone originally but now that is rare due to the ban in India). The bridge in turn supports the huge pressure of approximately 35–37 sympathetic steel or brass strings and three main gut strings that pass through it. The three main playing strings – the comparatively thicker gut strings – are bowed with a heavy horsehair bow and stopped not with the fingertips but with the nails, cuticles, and surrounding flesh.

Setar ~ a member of the lute family, which originated in Persia before the spread of Islam. It originally had three strings; two and a half centuries ago a fourth was added. It is played with index finger of the right hand, and has 25 – 27 moveable frets which are usually made of animal intestines or silk.

Shakuhachi ~ an end-blown notched bamboo flute from Japan. The modern standard version has four finger holes and one thumb hole. Originally imported from China by the early 8th century, it reappeared around the 15th century in a Japanized form and has since come to be used in several quite diverse types of music: meditative solos, small ensemble pieces, folksong, and modern works by both Japanese and foreign composers.

Sho ~  a Japanese free reed musical instrument that was introduced from China during the Nara period (AD 710 to 794). It is descended from the Chinese sheng, although the shō tends to be smaller in size. It consists of 17 slender bamboo pipes, each of which is fitted in its base with a metal free reed. Two of the pipes are silent, although research suggests that they were used in some music during the Heian period. The instrument’s sound is said to imitate the call of a phoenix, and it is for this reason that the two silent pipes of the shō are kept—as an aesthetic element, making two symmetrical “wings”. Like the Chinese sheng, the pipes are tuned carefully with a drop of wax. As moisture collected in the shō’s pipes prevents it from sounding, performers can be seen warming the instrument over a small charcoal brazier when they are not playing. The instrument produces sound when the player’s breath is inhaled or exhaled, allowing long periods of uninterrupted play. The shō is one of the three primary woodwind instruments used in gagaku, Japan’s imperial court music. Its traditional playing technique in gagaku involves the use of tone clusters called aitake (合竹), which move gradually from one to the other, providing accompaniment to the melody. See a demonstration by Naomi Sato here.

Tar ~ aft-fretted lute from Persia (Iran), which emerged in its present form in the middle of the eighteenth century. The long fingerboard has twenty-six to twenty-eight adjustable gut frets, and there are three double courses of strings. Its range is about two and one- half octaves, and is played with a small brass plectrum.

Tombak ~ a goblet drum, considered the principal percussion instrument of Persian music. The tombak is normally positioned diagonally across the torso while the player uses one or more fingers and/or the palm(s) of the hand(s) on the drumhead, often (for a ringing timbre) near the drumhead’s edge. Sometimes tombak players wear metal finger rings for an extra-percussive “click” on the drum’s shell. 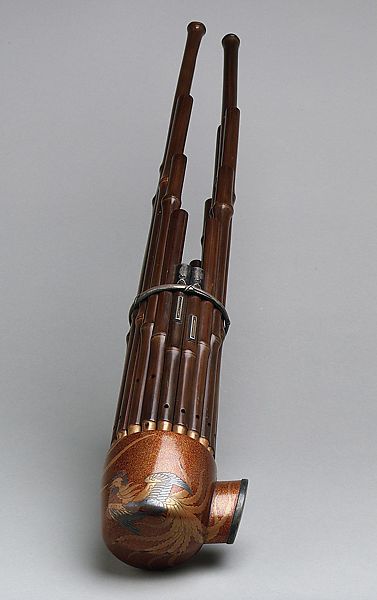 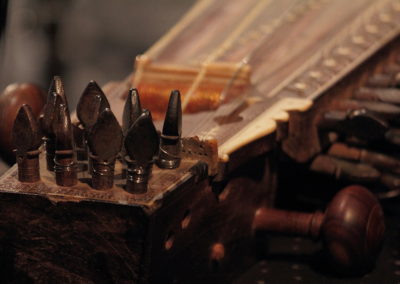 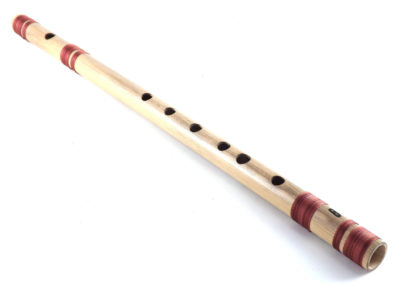 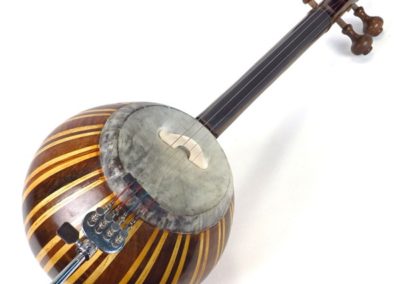 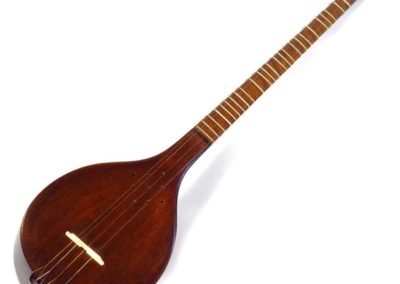 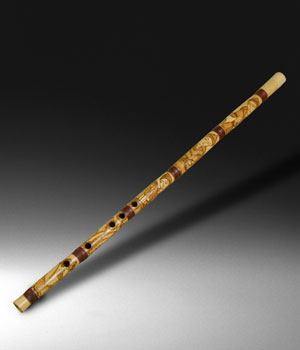 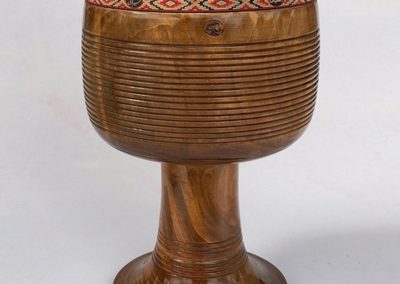