The VICO at 20: An Anniversary Celebration

The VICO turned 20 in the fall of 2021, and finally, one year later, we can celebrate with a concert!  The orchestra will be sharing the stage with longtime friends Laudate Singers, Ukrainian ensemble Zeellia, soloists Amy Stephen and Qiu Xia He, and more.  It’s all happening on Oct. 1, 2022 at The Rothstein Theatre in Vancouver. We’ve also just launched an exciting online silent auction as an anniversary fundraiser! Details

After producing digital versions of this festival in 2020 and 2021, the VICO is thrilled to once more be presenting it live and in-person this year! On the bill: international guest artist Ramiz Guliyev – a virtuoso on the Azerbaijani tar, who will make his first ever appearance in British Columbia with the Vancouver Inter-Cultural Orchestra, under the baton of his son, renowned conductor Ayyub Guliyev. Also featured: the Vancouver Erhu Quartet, 88 Strings, and Montreal’s innovative Ensemble Paramirabo!

The VICO’s annual Sounds Global Composers’ Workshop offers emerging composers unique opportunities to learn about and write for traditional instruments from all over the world. We’re excited to showcase the pieces developed in this year’s workshop at two concerts this spring:

Admission by donation at the door (cash only) 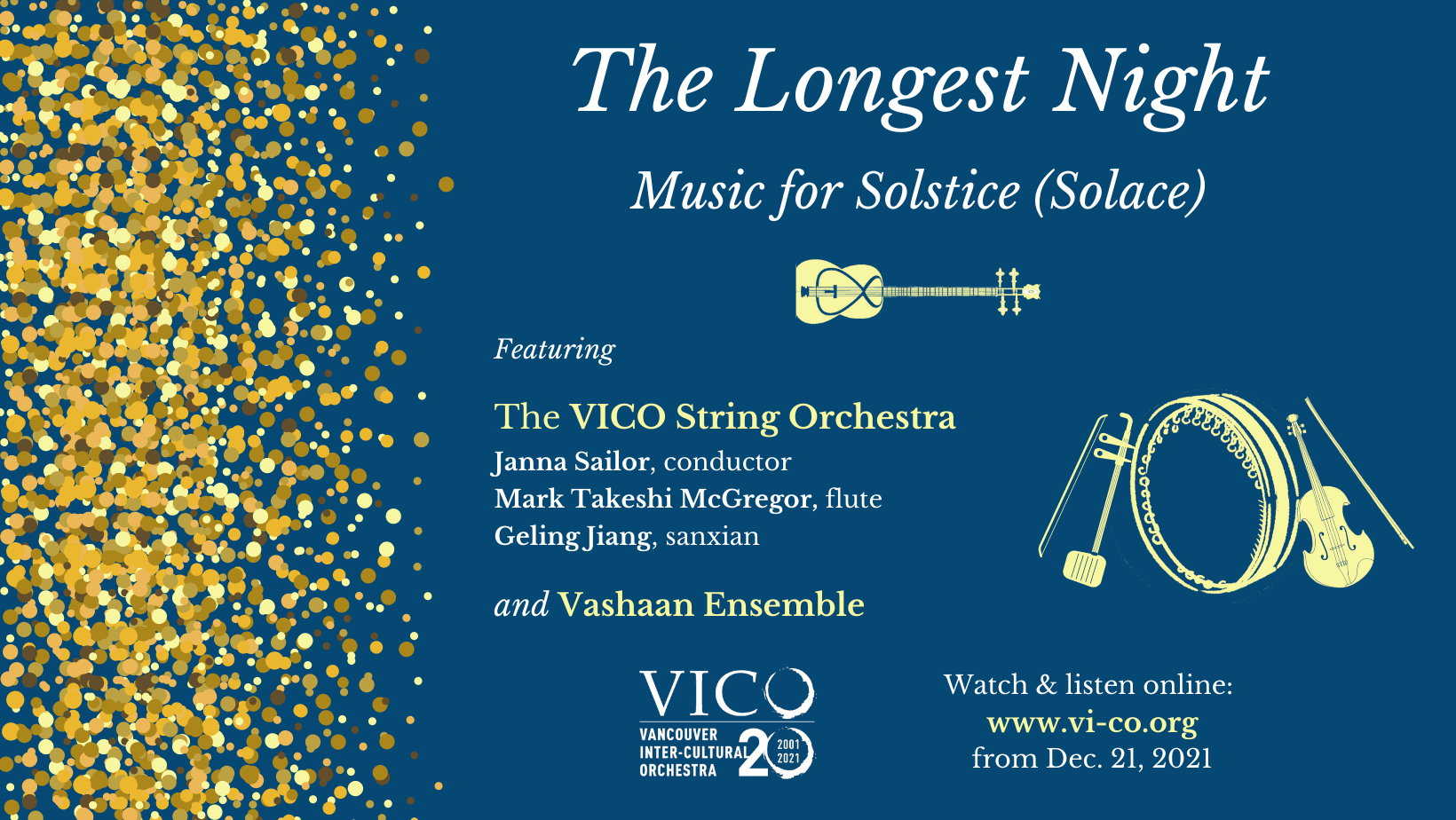 Our latest video series features the VICO String Orchestra with conductor Janna Sailor, soloists Mark Takeshi McGregor (flute) and Geling Jiang (erhu), and special guests Vashaan Ensemble. We hope that this colourful, innovative music, created and performed in a spirit of cross-cultural collaboration, will help to combat the darkness of winter here in the northern hemisphere, and the unsettled feeling of another unusual and challenging holiday season. The series includes new works for intercultural string orchestra by Leslie Uyeda and Rita Ueda; new arrangements by Mark Armanini and Farshid Samandari; and music for the traditional Persian instruments of Vashaan Ensemble by Saina Khaledi and Ali Razmi, as well as a selection of folk songs from Balouchistan and Shiraz (Iran).

What the Night Bird Told the Wanderer (2011 / 2021) is an anniversary celebration project that has been a decade in the making. In 2011, the VICO marked its 10th anniversary with two major concerts: Classical Meets Intercultural, and Orchestral Evolution, featuring two large-scale compositions that combined European classical sensibilities with a whole world of intercultural possibilities. Both Night Bird Singing by Mark Armanini and Dreams of the Wanderer by Moshe Denburg were recorded at the time – but busy schedules intervened and years passed, and the recordings were never finished.

Ten years later, as the VICO celebrates its 20th anniversary, composer- producers Mark and Moshe have gone back into the studio with engineer Sheldon Zaharko to mix and master their pieces, so that we may release them as a digital album.

Read about the music & featured composers!

What the Night Bird Told the Wanderer is available for digital download via Bandcamp, and also streaming on Spotify.

“…Music that sounds like Vancouver looks.” –The Georgia Straight
“The United Nations of music” – CBC Radio

The VICO acknowledges that our work takes place on the traditional and unceded territories of the Coast Salish Nations, including the Musqueam, Squamish and Tsleil-waututh Nations.

The Vancouver Inter-Cultural Orchestra, founded in 2001, was one of the first professional concert orchestras devoted specifically to performing new intercultural music on a grand scale. It is currently the only ensemble of its kind in Canada, and one of only a handful that exist in the world. The VICO brings together musicians and composers from many cultural and artistic communities in the Greater Vancouver area, including Chinese, Taiwanese, Japanese, Indian, Persian (Iranian), Latin and South American, Vietnamese, African, North American and European. The ensemble includes Western strings and winds (violin, viola, cello, contrabass, oboe, flute, clarinet) alongside Chinese erhu, sanxian, zheng, and sheng/suona; Persian kamanche, tar/setar, and tombak; Vietnamese dan bau; percussion from many world music traditions; and a variety of other instruments as required.

Since repertoire for the VICO’s unusual and diverse instrumentation does not already exist, creating new work is an integral component of all our programming. Developing new commissions (over 50 new Canadian works since 2001, and counting!) provides a necessary framework for bringing musicians and composers together to learn from each other, in a uniquely collaborative process. We build bridges of imagination. We approach diversity as a fascinating challenge and a creative call to action. We create and perform music that transcends borders and breaks down barriers, modeling a pathway for integrating non-Western traditional instruments, sounds and techniques into contemporary Canadian classical music.

Read more about the history of the VICO here.