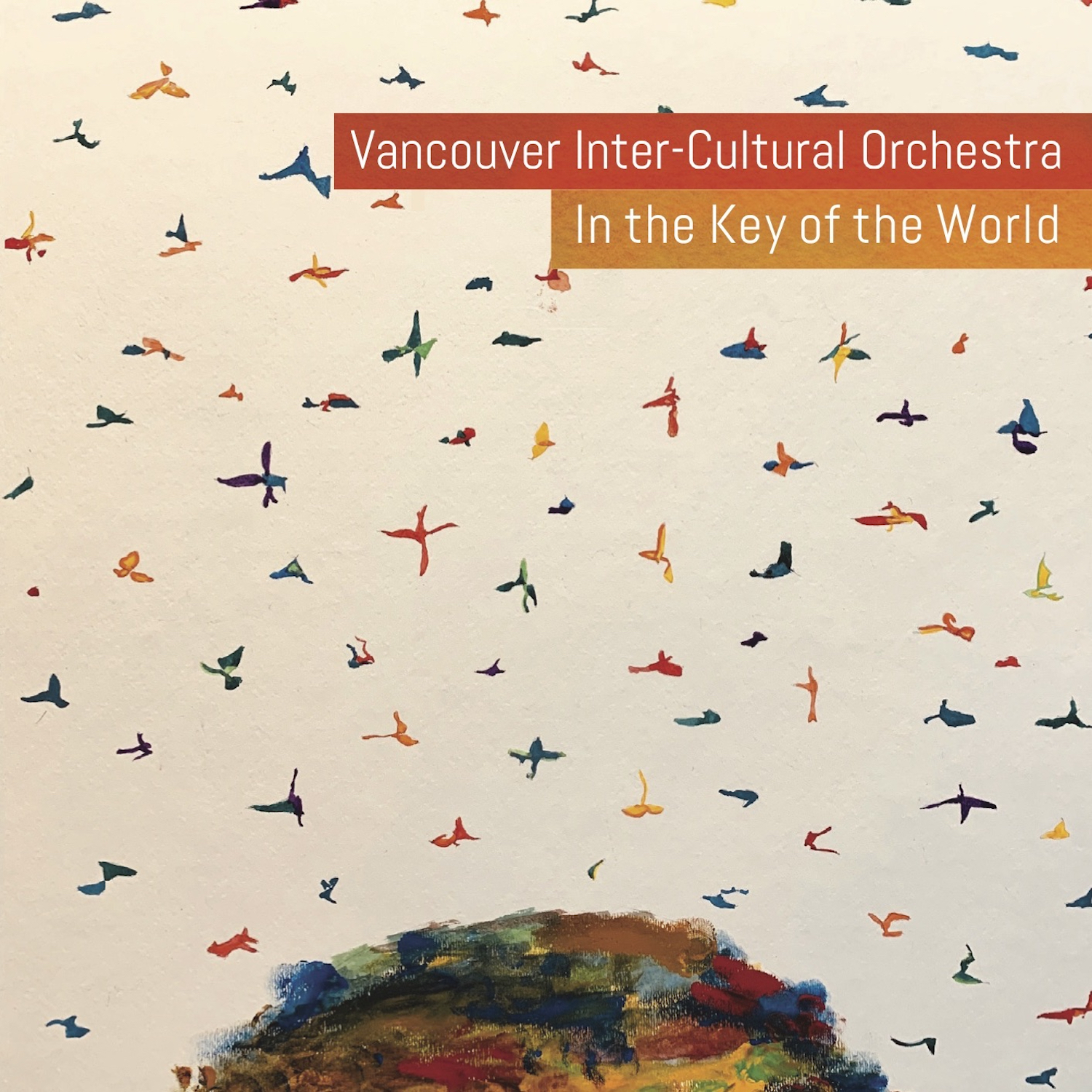 In the Key of the World is the Vancouver Inter-Cultural Orchestra’s first full-length studio album. It features music by Canadian composers Dorothy Chang, John Oliver, Moshe Denburg, and Farshid Samandari, performed by an ensemble of 28 musicians playing instruments from a wide range of musical traditions, including Chinese, Vietnamese, Persian, East Indian and European.

In the Key of the World, like the VICO itself, exists in several musical genres at once: world, classical, traditional. It’s fusion music on a global scale; music that transcends borders and breaks down barriers, throwing open the doors of contemporary classical music and forging a new path towards a truly diverse 21st-century Canadian music scene. 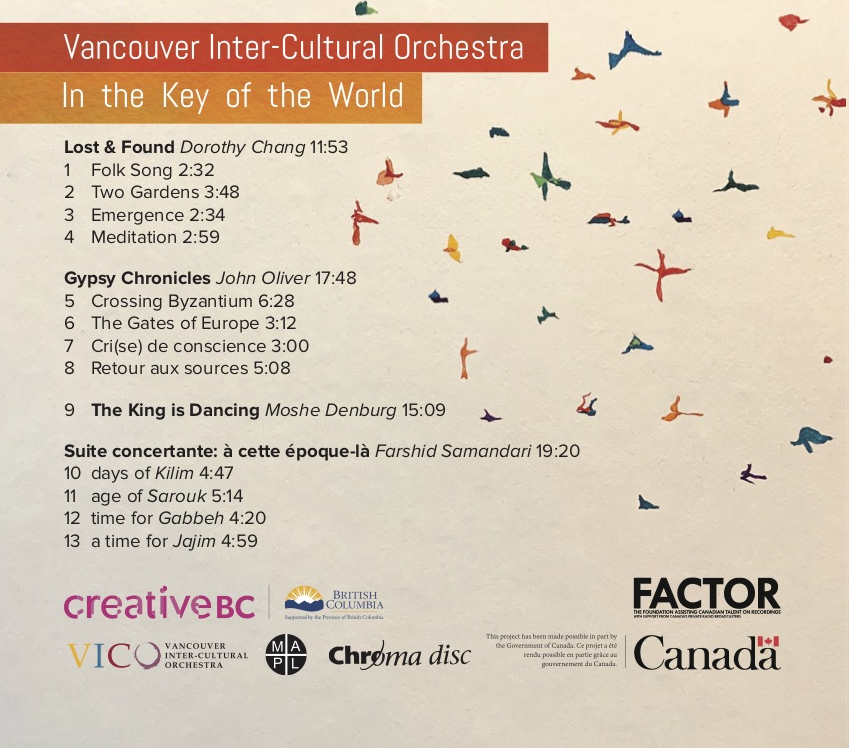 “Intercultural music has existed for centuries in most traditional cultures,” says VICO Artistic Director Mark Armanini. “The VICO has spent the past two decades developing a contemporary musical art form that draws on this history and brings the idea of “music as a universal language” to global fruition. We have developed a ground-breaking intercultural sound palette and repertoire that combines aural and written traditions, ancient and contemporary styles, and a huge variety of instruments (bowed strings, plucked strings, winds, brass, percussion) into one ensemble.”

Listeners will hear each of the distinctive, ancient musical traditions represented on In the Key of the World – Chinese, Jewish, Persian, Indian and Western European – take on vibrant new colours when showcased in intercultural orchestrations.  The album offers a glimpse into the limitless creative possibilities of the intercultural orchestra, and the VICO is proud to present this music to the world, as an aural offering of humanistic beauty and hope for a harmonious future.

The VICO extends grateful thanks to Creative BC (Amplify BC), FACTOR, our Indiegogo contributors (listed below) & private donors for their crucial support of this album. 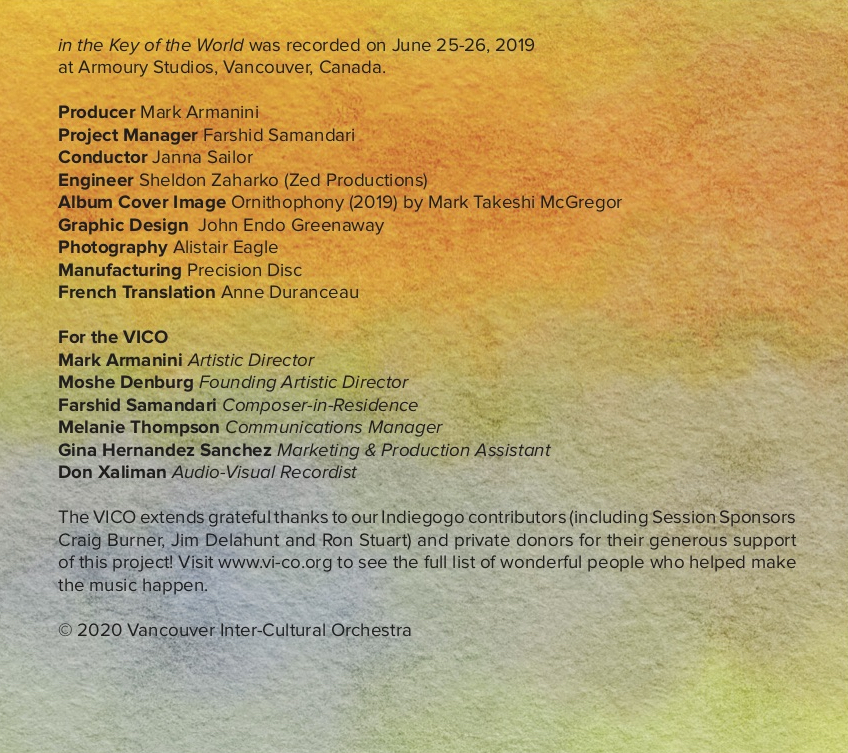 More about the VICO

Featured Composers & Notes on the Music

Hear an excerpt from Dorothy’s piece Four Seasons, accompanied by footage and photos from the album recording sessions at Armoury Studios in Vancouver.

Dorothy Chang’s music often reflects an eclectic mix of musical influences from her youth, ranging from popular and folk music to elements of traditional Chinese music. Her catalogue includes over seventy works for solo, chamber and large ensembles as well as collaborations involving theatre, dance and video.  Her interest in cross-cultural and interdisciplinary collaboration has led to projects including a radio play adaptation of Gertrude Stein’s White Wines for four vocalists and speaking percussionist, several mixed chamber ensemble works for Chinese and Western instruments, and recently, a collaboration with choreographer Yukichi Hattori and four other composers in the large-scale True North Symphonic Ballet premiered in 2017 by the Calgary Philharmonic Orchestra. https://www.dorothychang.com/

“I consider Lost and Found to be an autobiographical piece; the exploration of various approaches to combining Chinese and Western musical elements in this work is a reflection of the challenges I have faced as an American-born Chinese addressing issues of self-identity. The four movements of this work incorporate Eastern and Western influences in different ways, at times featuring the diversity of the two instrumental groups and musical traditions, and at other times merging them to create a distinctive hybrid sound world.”

Watch a video interview in which Moshe Denburg discusses his piece The King is Dancing, accompanied by footage from the album recording sessions at Armoury Studios in Vancouver.

Moshe Denburg hails from a well-known Montreal Rabbinical family, and came to the West Coast in 1982. His musical career has spanned five decades and his accomplishments encompass a wide range of musical activities, including composition, performance, music education, and artistic direction. He has studied music extensively, both formally and informally, and for the past 30 years has been engaged in exploring the musical resources of the non-Western world, creating music that challenges musicians of differing disciplines to work together across aural/written cultural divides, and to find a common musical aesthetic. He has traveled and studied worldwide, including in the United States, Israel, India and Japan. In 2001 Moshe founded the Vancouver Inter-Cultural Orchestra, and has been involved in its evolution ever since. His compositions have been performed, recorded, and broadcast at festivals and on the radio both in Canada and abroad. He is the recipient of many Canada Council grants and commissions and is an associate composer of the Canadian Music Centre.

Composer’s Note on The King is Dancing:

“An intercultural ensemble work (India/West), based on the Phrygian mode, The King is Dancing was a direct result of my studies in Madras (Chennai), India, in the 1980s. The title has several meanings: firstly, I remembered a documentary about a Zulu chief who, after passing judgement in a tribal litigation, began to dance – enjoining the assembled members to do likewise. This image and idea resonated in me for some time, coming to represent ‘the dignity of the sensual world’. Then, well after I titled the work, I realized that there are other references to ‘a king who dances’ – a) King David danced before the people, and was criticized in some circles for ‘a lack of dignity’; and, b) very significantly for my journey in India, Lord Shiva, of Hindu mythology, dances an eternal dance of creation and destruction.”

Watch a video in which John Oliver discusses his piece Gypsy Chronicles, accompanied by footage from the album recording sessions at Armoury Studios in Vancouver.

John Oliver is a multiple-award-winning composer & performer who writes opera, orchestra, chamber & electroacoustic music. Winner of the Classical Composition of the Year Award at the 2013 Western Canadian Music Awards for his orchestral composition Forging Utopia, he came to international attention early in his career when he won six composition prizes for five compositions ranging from chamber to orchestral to electroacoustic music, including the Grand Prize at the 8th CBC National Young Composers’ Competition for his live electroacoustic work El Reposo del Fuego. Commissions and performances flowed from the likes of the Canadian Opera Company, National Arts Centre Orchestra, Vancouver Symphony, CBC, Vancouver New Music, St. Lawrence String Quartet, Turning Point Ensemble, New Music Concerts, and the SMCQ (Montréal), among others. Oliver has two solo releases to his credit: Time is Dust, and Forging Utopia. http://www.johnolivermusic.com

Gypsy Chronicles is an imaginary musical journal in four parts, crossing Byzantium – modern-day Istanbul – toward the gates of Europe in search of the source of music in ancient melody and harmony, un-tempered and untamed, resonating with nature. I imagine musicians converging there, from all parts of the Silk Road, to play this music that comes down to a handful of tones which they might play over and over again, searching for the source of their common musical heritage. One day I will make this trip. Meanwhile, I am fortunate to live in Vancouver, a city where excellent musicians from these regions have settled and can realize my dream-music.” 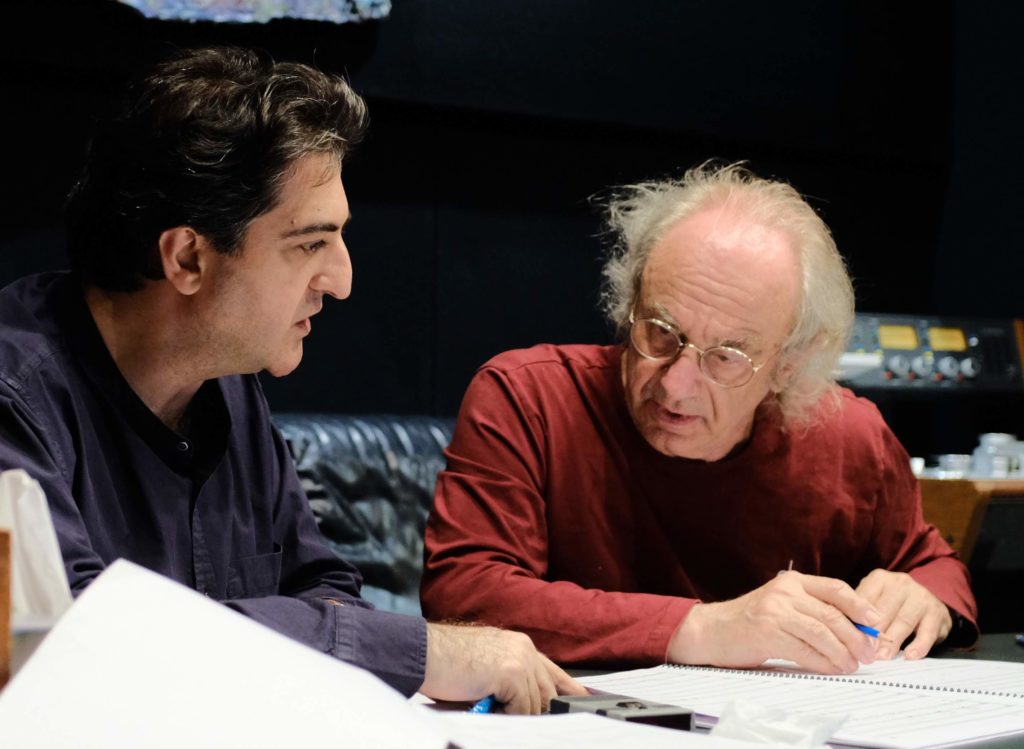 Watch a video interview in which Farshid Samandari discusses his piece Suite concertante: à cette époque-là, accompanied by video footage of the album recording sessions at Armoury Studios in Vancouver.

“Suite concertante is a program suite dramatizing Iran’s history in the past 150 years, through the analogy of four Persian rugs. Each has a distinct social/geographical origin, recalling particular lives and times. ‘Kilim’ is a tribal flat tapestry woven carpet with geometrical designs derived from nature. ‘Sarouk’ is a delicate carpet, often made of silk, with curvilinear and floral designs of a more abstract nature. ‘Jajim’ is a nomadic flat woolen tapestry rug made and used by nomadic peoples, with abstract minimalist designs. ‘Gabbeh’ is a pile rug made and used by nomadic peoples, with designs derived from life.”

Click the image to view lots of photos by Alistair Eagle, taken during the VICO’s recording sessions for In the Key of the World at Armoury Studios in Vancouver, BC.

Watch interviews with the four Canadian composers featured on In the Key of the World, as they discuss their approach to creating intercultural music, accompanied by footage of the album recording sessions at Armoury Studios in Vancouver. 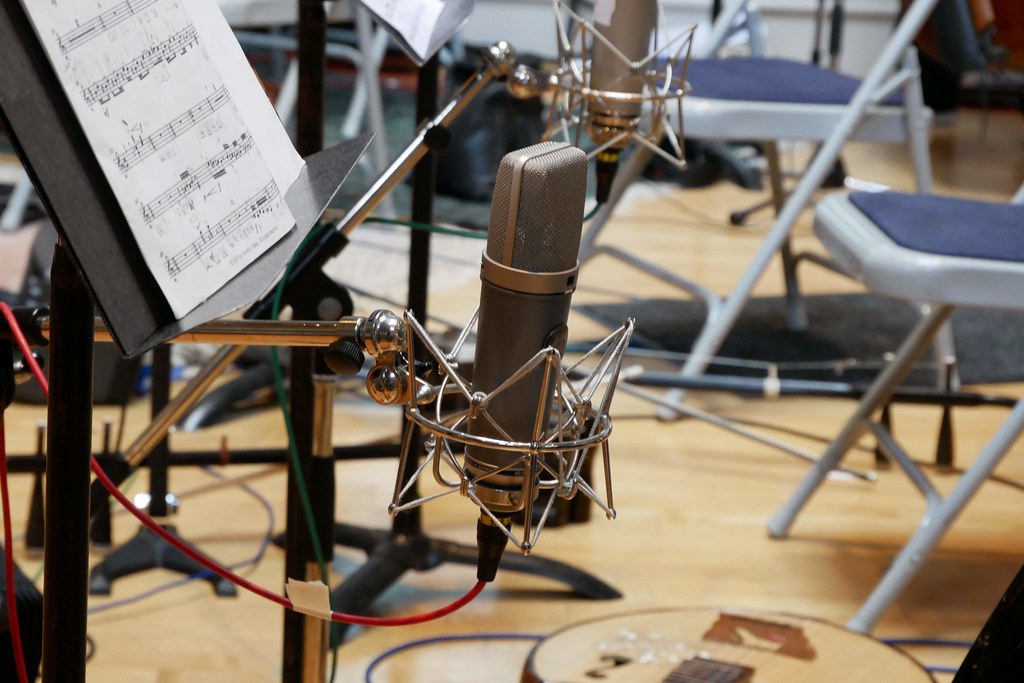 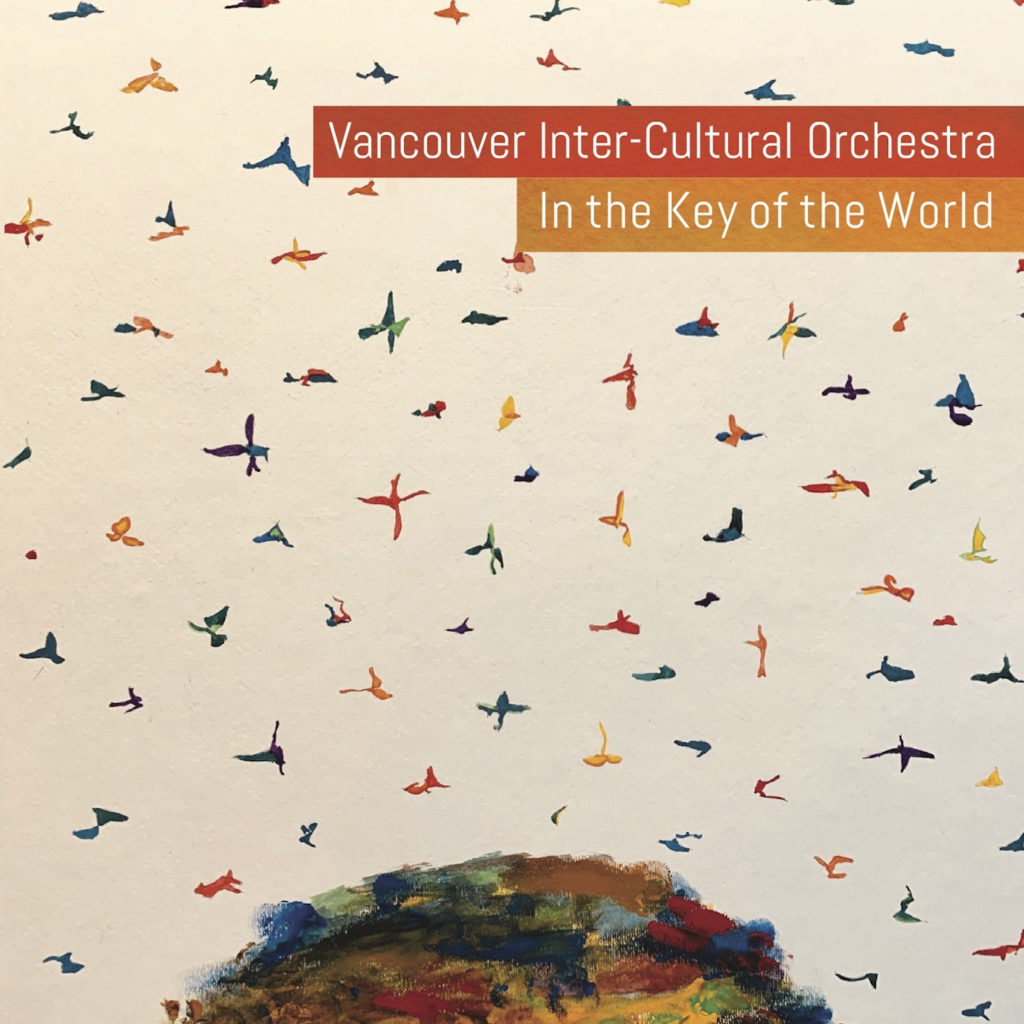 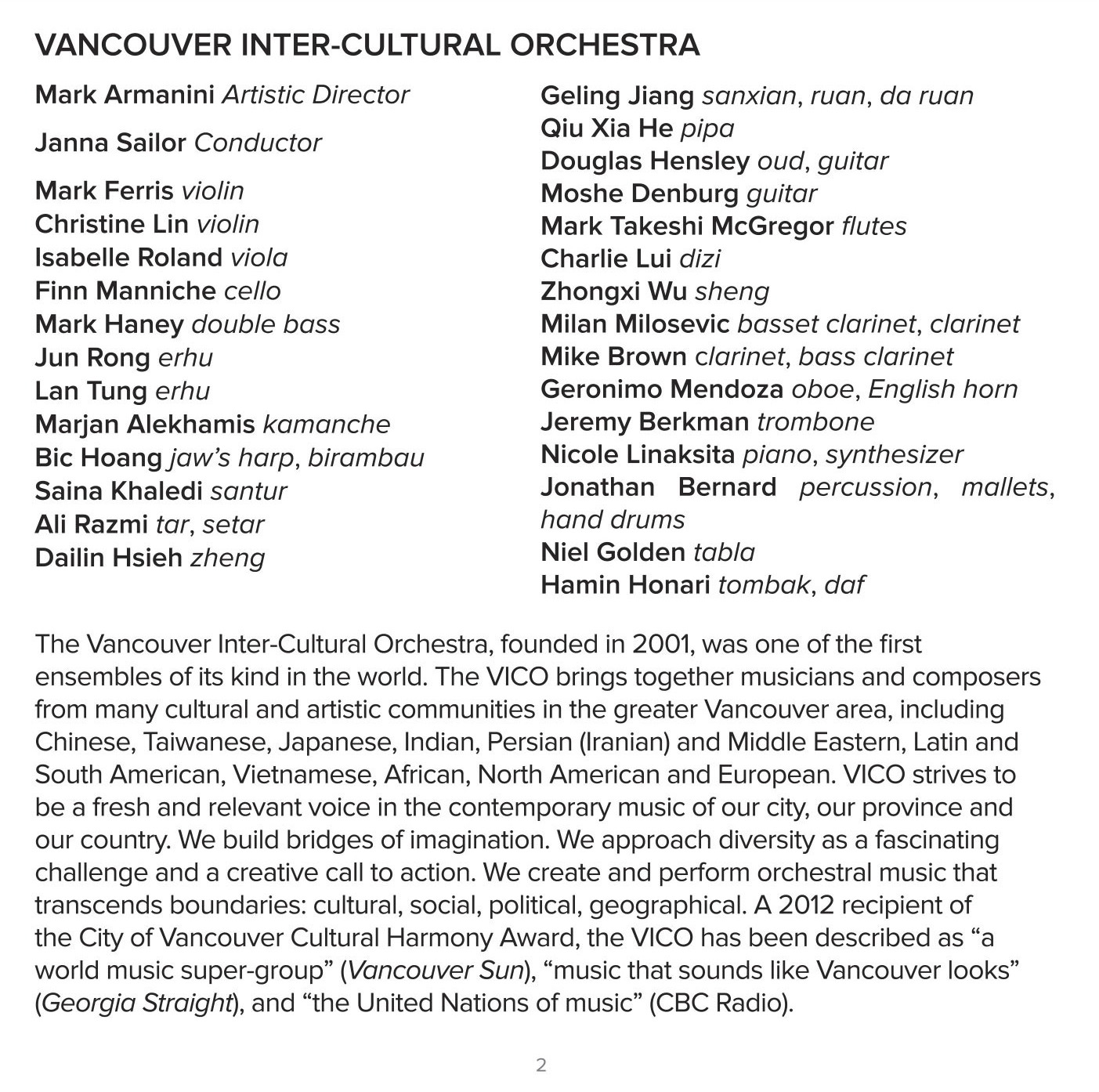 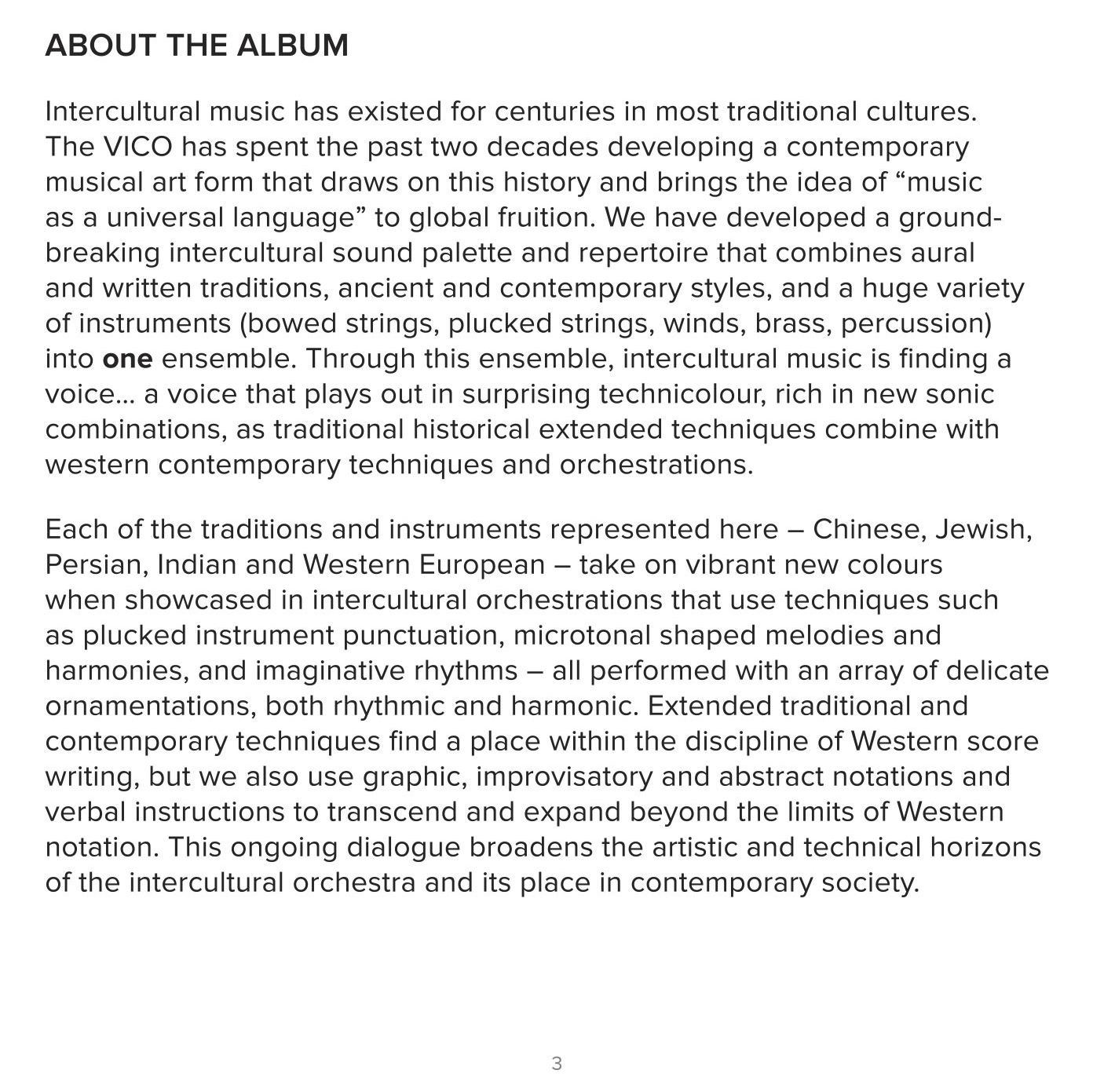 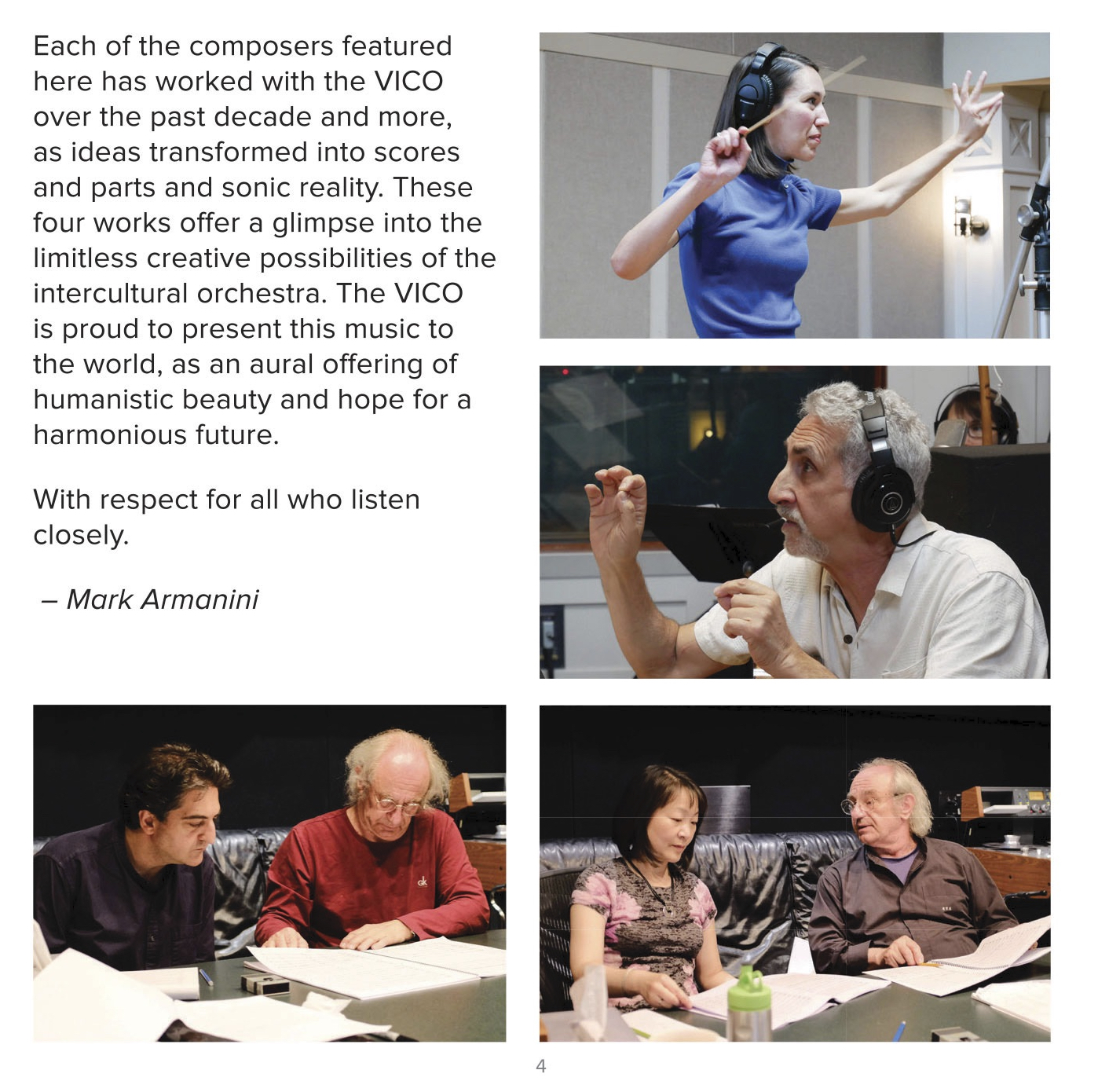 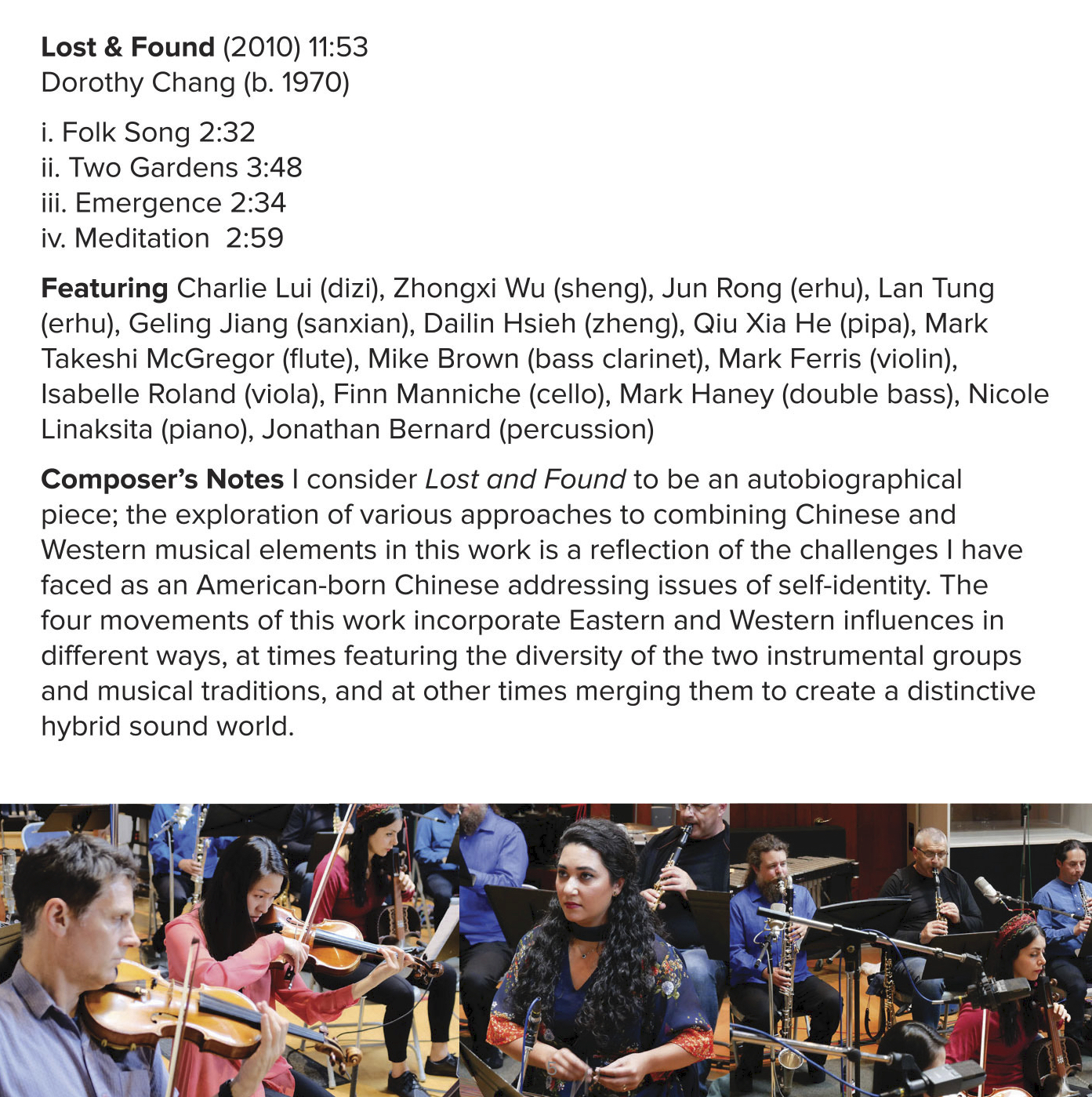 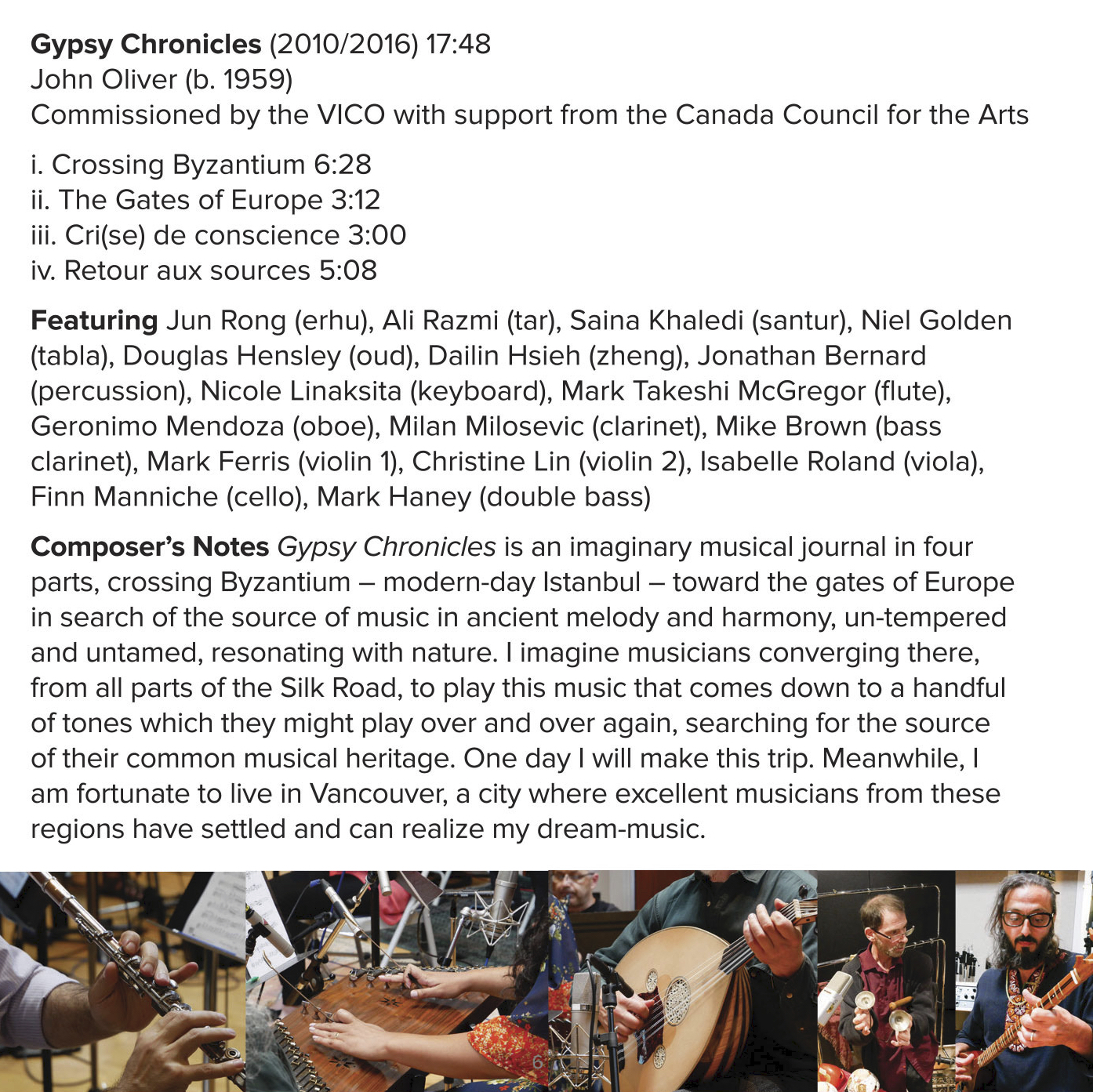 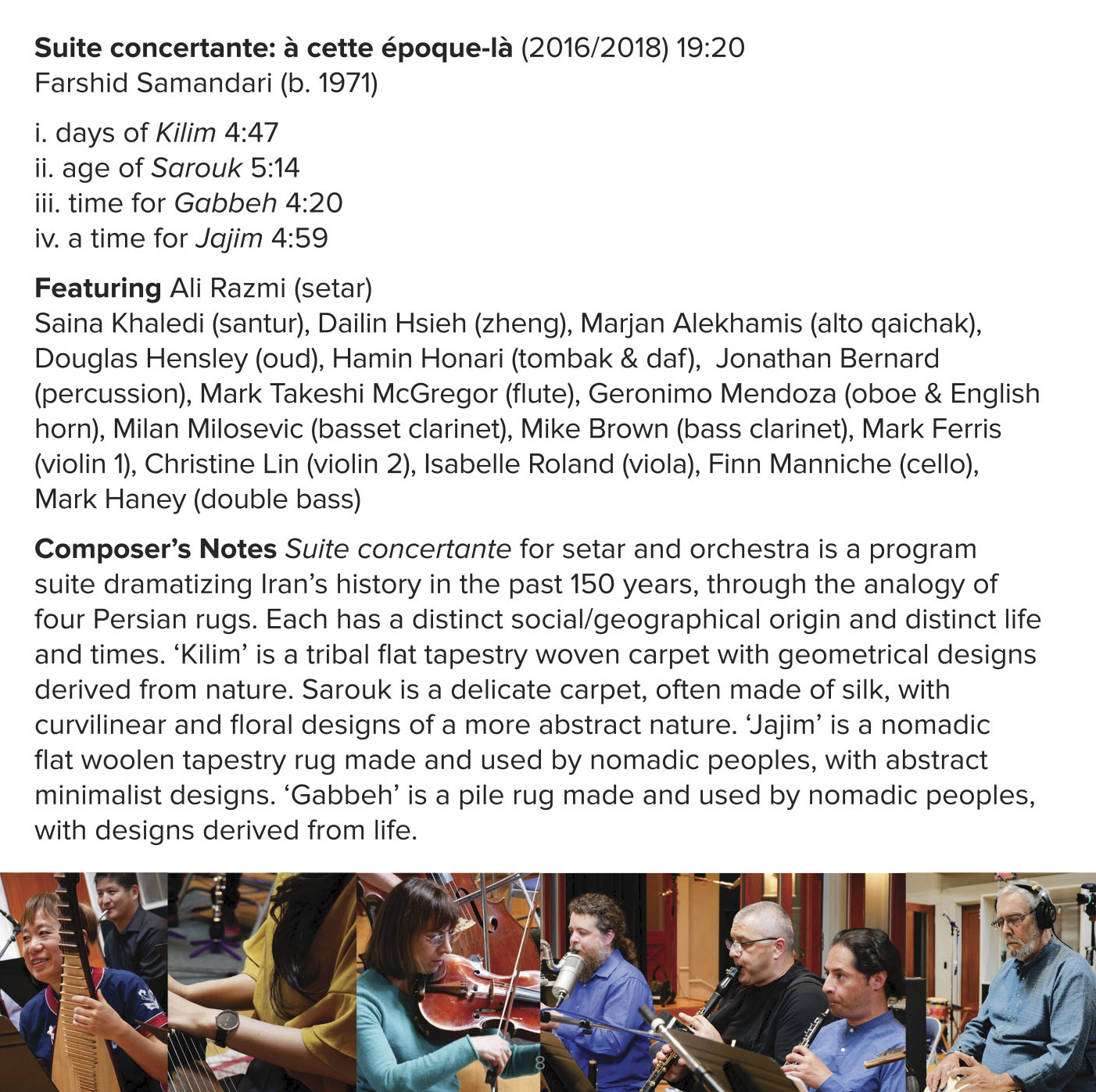 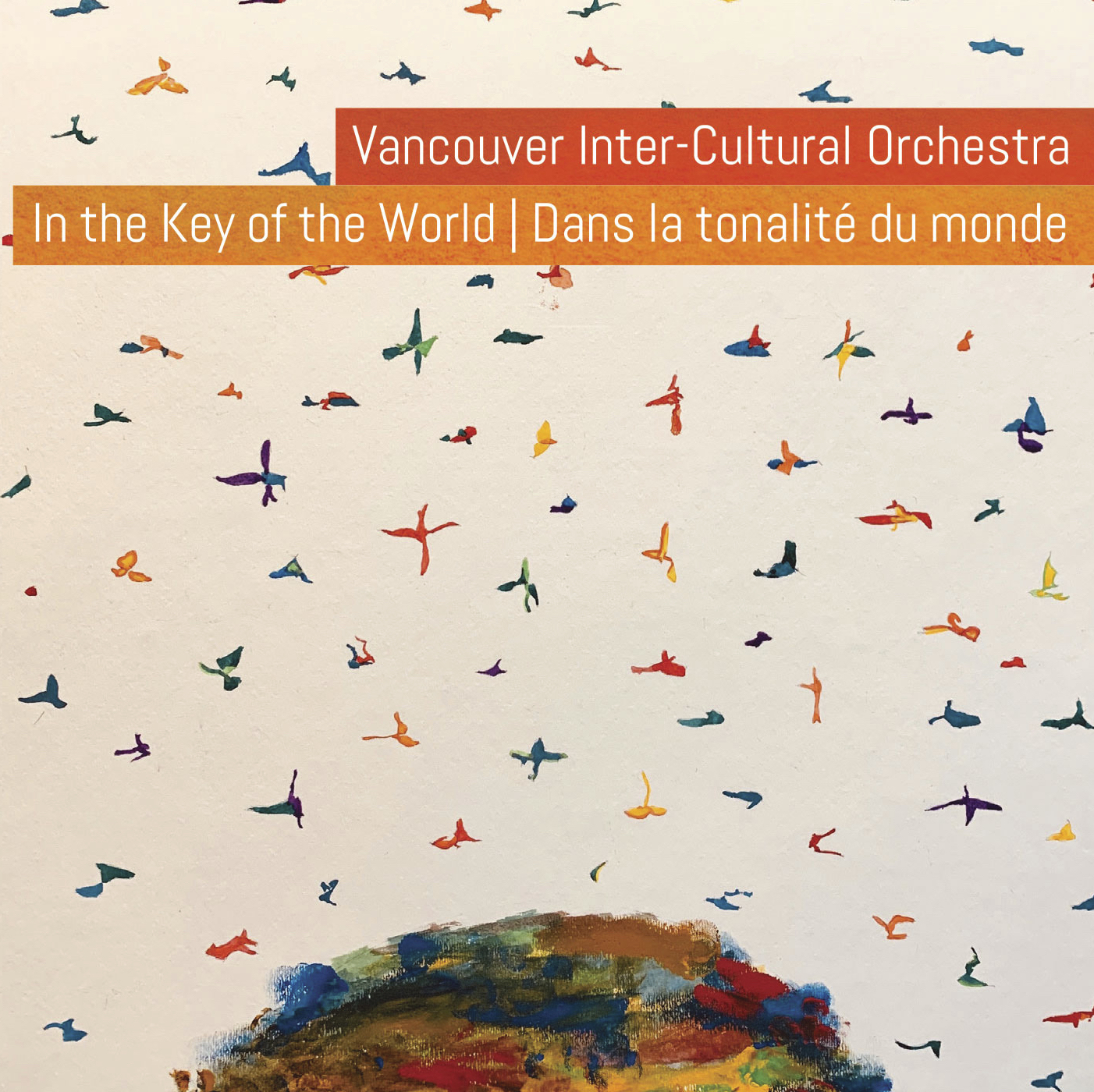 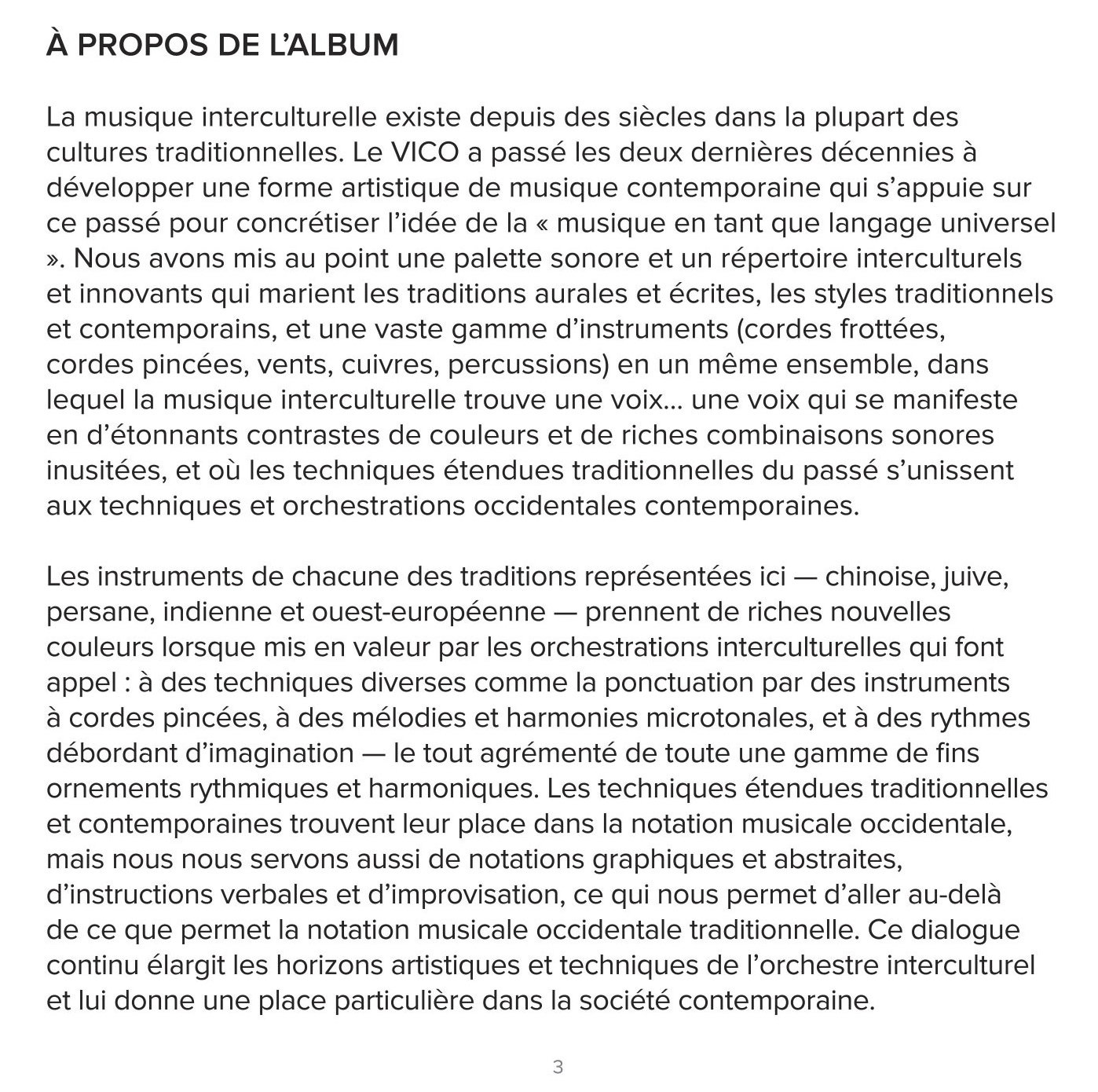 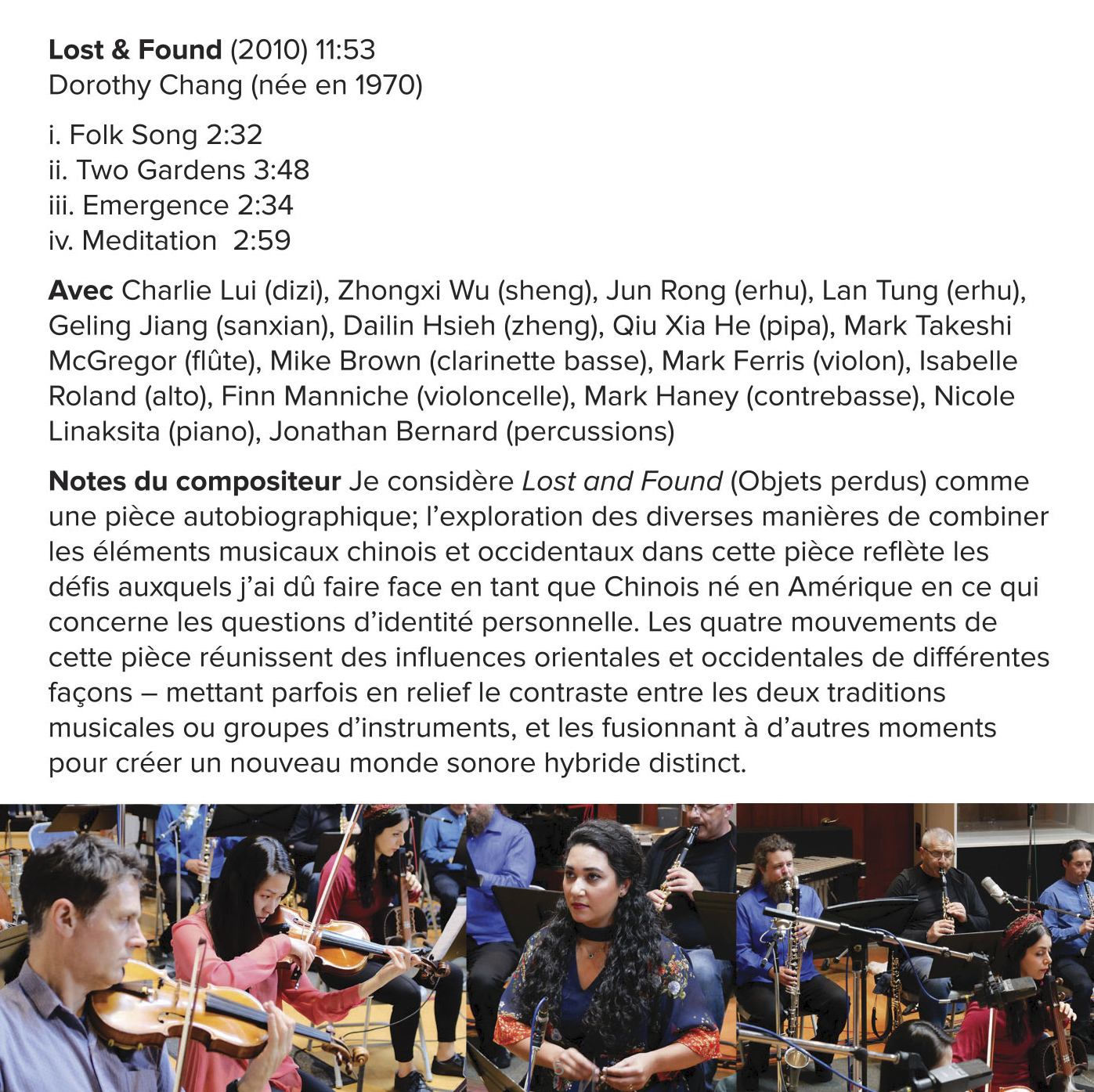 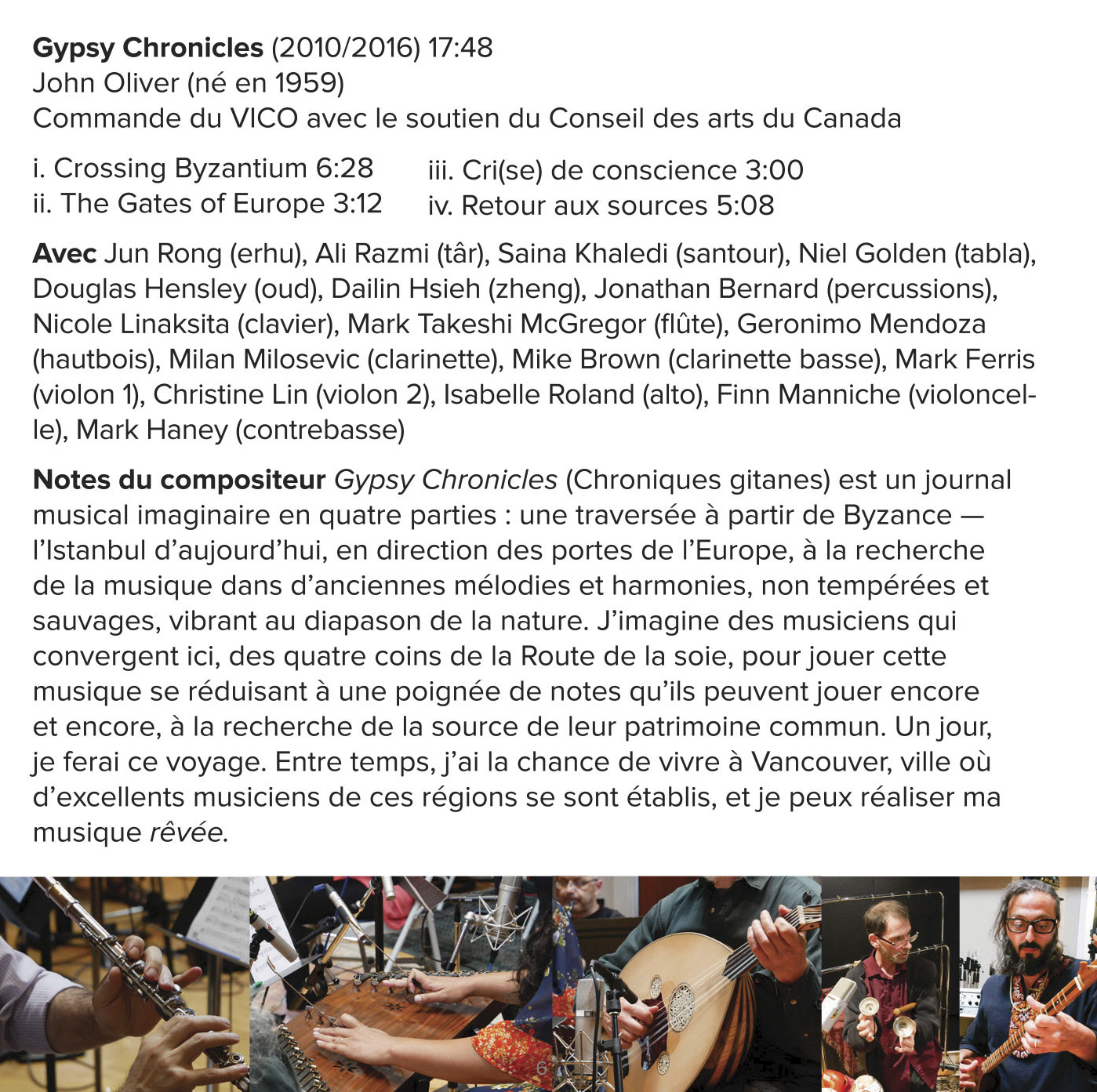 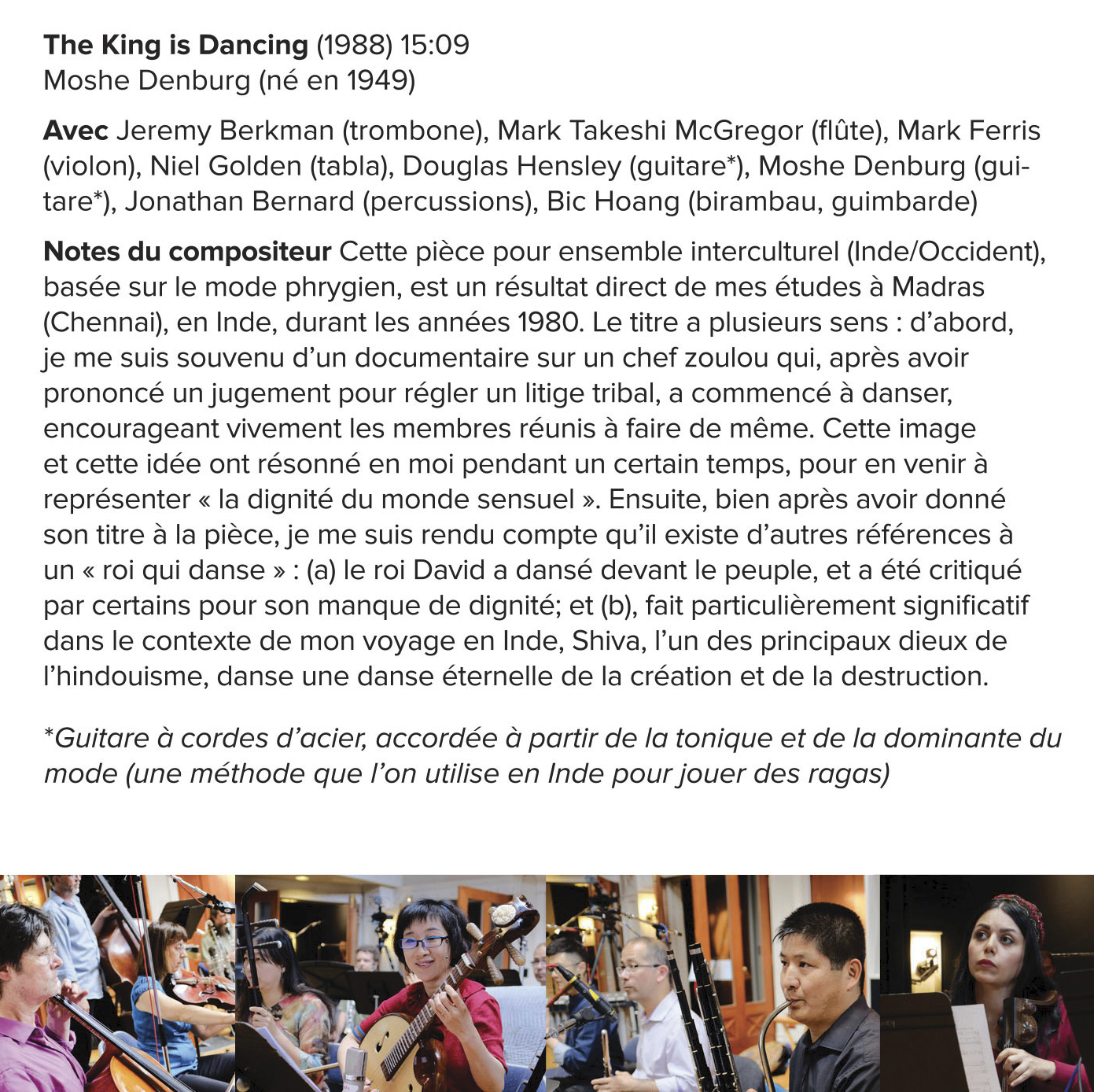 This project was made possible in large part thanks to the generous support of the following funders:

Thank you so much to these wonderful people, who helped us to bring this music into the world!