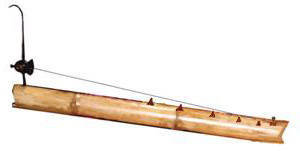 Dan Bau is a one-string zither native to Vietnam. It is constructed of a long narrow sound box, with a tall curved stem made from water buffalo horn inserted at one end. The single string runs between the sound box and a small wooden gourd attached to the stem. The stem is bent to change the pitch of the string. The player touches the string lightly with the heel of the hand at harmonic producing nodal points while plucking with the fingers or plectrum. This produces the dan bau’s characteristic high clear sound. As the sound box of the dan bau is very narrow, it is not a loud instrument, and was traditionally used in more intimate environments. In recent years an electronic version has been introduced to be played in ensemble and large concerts. The bass bau was adapted from the dan bau to provide a musical range equivalent to that of a bass guitar. It is simply an electric dan bau with a very thick string on it.

The origin of the danbau is a bit obscure. It is associated with children playing on a string with a stick. Long ago

the danbau was constructed from dried fruit (perhaps a gourd). Very long and narrow fruit (perhaps squash), once dried, could be used for the danbau’s body. The resonator is the ‘bau’. Danbau is the name of the fruit. The danbau is sometimes called ‘a harmonic monochord’.

The bell resonator at the stem is made of wood today. Originally this bell was very big, but with the use of the amplifier today, size is unnecessary. On the danbau that this author studied, the stem was made of buffalo horn. Originally it was of bamboo. Horn is much more flexible. The basic resonating box is made of wood, with a sound hole at the bottom. A little pickup at the nut end is used for amplification.

Frets – An invention by master musician Chi Khac, is to have little frets beneath the open string at the

nut end of the instrument (not the stem end). These render notes with a wavy sound. There are 5 move- able frets, which are placed at nodal points, except for partial 8. The frets render a bit more open sound than the muted tones – a slightly muted shake or vibrato. Care needs to be taken to get them in tune with the harmonic series. The thumb (of the r. h.) is placed by a fret, and the other fingers hammer down to the right of this fret. The stem is free to be utilized as well, rendering the gamut of pitches.

Keys for a C tuning: C, D, F, G, Bb and related minors are best. These are keys from 2 sharps to 2 flats in their key signatures.

Keys for a B tuning: B, Db, E, F#, A and related minors are best. However, check the notation with the performer. The key signatures for these keys may look unfamiliar. Perhaps a transposed part (written in C) is best.

There is a machine screw for tuning at the nut end. It is possible to retune between one movement and another. As stated before the fundamental is either c or B. It could even be retuned while playing, though one needs to check this retuning idea with the performer. A benefit of tuning down to B from c is that one obtains a new set of harmonics.

A characteristic range is g (below middle c) to e3 (two octaves and a major third above middle c).

The danbau can be notated in the treble clef. For the lowest octave (c to c1), one can use leger lines or perhaps a bass clef. Check with the performer about this.

Basically, the danbau produces harmonic sounds. With the help of the stem (a lever/stick) the pitch can be moved up or down. The open string can be moved an octave down or a major 3rd up.

The pitches are produced by plucking with a small bamboo stick (plectrum) or the finger. The palm of the hand that plucks is placed at a harmonic node on the string, while the other hand operates the lever/stick. These different harmonic pitches can be varied by moving the lever up or down, and thus the entire gamut of pitches can be produced. This makes the instrument chromatic.

Long, graceful notes, and lingering phrases with ornaments and vibrati are best. The danbau has a very long decay. An entire melodic line can be played on one pluck. Very expressive and flexible vibrati and grace notes can be produced.

Use of the plectrum (bamboo stick) is essential for quick notes, especially repeated notes. A technique utilizing a finger to produce tremolos and repeated figures is not traditionally practiced. The actual sound produced with the plectrum is not very different from that produced with the finger, though the finger may be a bit softer, in soft passages. If a finger is used tremolos are less produce-able.

There is a very narrow dynamic range, let us say mp to mf. It seems that once the harmonic is produced, not much can be done to change the dynamic. Of course, on a long decay, or a phrase on one pluck, the later notes will be more and more subdued.

An amplifier is needed for all but the most intimate solo playing, since the danbau has very quiet dynamics. A little amp is very handy, helps to project the sound, and makes possible the use of the instrument in ensemble situations.

Quick figures become harder to produce, as more bend is used. Thus, bending down a 4th, for example, one can assume good pitch production on quick figures, but lower than this the pitches are harder to produce discretely. One can bend down one octave, and bend up a major 3rd.

At 132 to the quarter note, it is hard to get scalar-like sixteenth runs, though an 8th followed by two 16ths

followed by two 8ths, are ok.

It is much more difficult to get speed playing larger intervals. A scalar run in 16ths is possible at 100 to the quarter note. This would seem to be very fast for the danbau.

Large stem bending makes speed more difficult. Speed on repeated figures whose notes are closely related to a node is possible. c2 – b1 – c2 – b1, etc. at 100 to the quarter is ok.

Of course, tremolos or very quick repeated notes are do-able.

a) Use of a bow is possible; it sounds like a cello. Special practice and preparation is necessary. b) Using the fundamental (open sting) as a pedal point to punctuate a melody is possible.

c) In between nodes (any nodes), a ‘bell’ tone is obtained. This can be played with by stem manipulation. It is not a discrete pitch.

The danbau goes well with the erhu, the yangqin and other Chinese instruments, generally. Traditionally, this has been done a lot – with zheng not so much, but with ruan, pipa, and dizi, yes. Danbau also goes well with choir and with bowed strings.

The author wishes to thank Bic Hoang and Chi Khac for their instruction.

1. Terry E. Miller, Sean Williams The Garland Encyclopedia of World Music: Southeast Asia: Volume 4 1998, reprinted The Garland handbook of Southeast Asian music 2008 Page 261 “The đàn bầu is played solo or to accompany folk songs, tales, and epics. It has had a remarkable history. Discriminated against at times, it has been an instrument of blind street beggars, yet it was also an instrument of choice at the Tran imperial court (1225-1400).”

3. Dale Alan Olsen -Popular music of Vietnam: the politics of remembering 2008 Page 50 “In the summer of 2005 I specifically asked Hồng Nhung about my analysis of her style: D.O.: Are you influenced by ca trù, đàn bầu, the improvisatory instrumental style of water puppet theater, or other northern Vietnamese traditional music styles?”