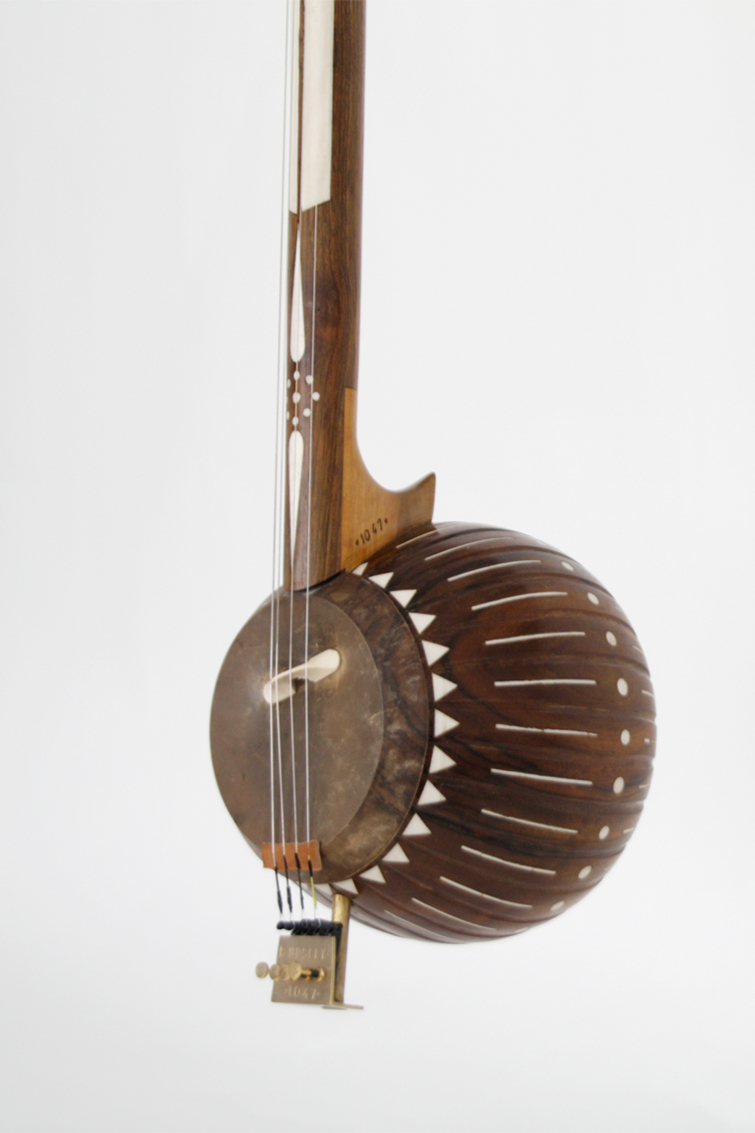 The Kamanche is a 4 stringed bowed instrument common in Iran (Persian Music) and in other middle Eastern and Arabic traditions. It can be found all over the near and middle east, and in countries such as Azerbaijan, and Russia. It has a resonance box made of hardwood, such as walnut, on one end, which is covered with a very thin young goat’s skin. Other membranes include sheepskin and fish skin. Its wooden bridge is curved to allow for the bowing of separate strings, and it is placed in a slanted manner upon the membrane. Some resonance boxes are made of a whole piece, and some, in Iran, are made of several strips bound together. The resonance box may be closed or open at the back. The Kurds, for instance, use an open back, which gives it a very loud and more nasal quality. The neck, also made of a very hard wood, is attached to the resonance box, and has pegs at the top end to tune the strings. At the bottom end there is a spike, which is used to hold the instrument upright as it is played, (in the manner of a Cello, but it does not extend as far as the ground – ch). Nowadays, some Kamanches are made of softer woods, such as spruce.

There are various tunings in use, and the composer must consult with the player to ascertain what is most comfortable for him.

Traditionally, the most common tuning is a series of fifths, like the western violin, but one tone lower:

There are several common scordaturas, all of which can be tuned without restringing:

These scordaturas are especially useful when playing in modes or in keys which have a strong tonic reference. For example, for a piece written primarily in G, a good tuning could be: g – d1 – g1 – d2. Similarly, a piece in F would be rendered well in the scordatura: f – c1 – f1 – c2. The 4th tuning above is very close to that of the western violin.

There is an open question whether the written notation should be one tone higher, thus D (written) = C (concert). This might be the case, especially with the traditional ‘western violin’ tuning mentioned above, but it also may be out of date. In all cases one should check with the performer and abide by his preference.

Keys with many flats or sharps are unusual for the Kamanche player, though they are not impossible. Asking for improvisation in a key with many accidentals will not work well – the idioms of improvisation demand simpler keys, preferably with tonics and/or dominants on the open strings.

The western notational system is normally used. Some specific Persian ornaments have special markings, but these too, once understood, can be notated with western devices. The composer who wishes to call for traditional ornaments needs to inquire of the Kamanche player what these are specifically. For 1/4 tone accidentals the following symbols may be utilized:

The professional’s range extends up to one octave above the highest string (string # 1). Thus, if the

Kamanche performance belongs to the traditions of modal music in the world, more specifically the Persian-Arabic tradition. The modes of these traditions incorporate quarter tones and/or microtones, however, these modes are not chromatic and the western composer needs to look into the modal traditions themselves in order to grasp the larger modal concepts. There are many styles of Kamanche playing, including those from: Iran (Persia), Azerbaijan, Russia, and the Arabic world. The style of Kamanche playing in the Arabic world is close to that of the Persian tradition.

The ideal of clean notes, though executable, is not so important in traditional Kamanche playing. The Kamanche can of course play discrete tones, as in the west, and so the modes and scales of the western world are playable on it. However, it is very idiomatic for the bow to touch open strings while playing fingered notes. This is especially so when the adjacent open string is a tonic or a dominant of the mode being played.

The Kamanche has very good expressive qualities. The dynamic range is good from the point of view of feeling, and there is dynamic control from a very soft to a quite piercing sound. However, its volume output is generally softer than the western violin. In this regard it is more delicate dynamically.

a) Slurred phrases (many notes to the bow), in a stepwise progression, can be played extremely quickly. Assume top speed for a stepwise movement, in a not overly long phrase, in 32nd notes at quarter note = 100;

b) Detache (one note per bow) can be executed comfortably up to (approximately) 16th notes at quarter note = 100mm.

c) Tremolos on one note can be executed very quickly; assume 32nd notes at quarter note = 100

Down bow is considered to be to the right (like the western Cello). Upbow to the left. ≥ and ≤

The kamanche can execute legato (slurred or one note to a bow), detache, and some basic light staccato. The 1st and 4th strings can be bowed jete, since one can easily avoid striking the other strings.

Fingered chords are possible but very unusual. It is best considered a special technique and planned for in consultation with the performer. However, bowing a fingered note together with an open string is very do- able, and even idiomatic.

The normal vibrato used in Persian Kamanche playing is a slide vibrato. This is different than the shaking finger of western violin playing. On Kamanche the vibrato is executed by a small back and forth sliding movement on the string. This kind of vibrato is very idiomatic.

Glissando is very performable, though sliding between notes is not a traditional technique. However, the kamanche is well adapted to all the combinations of vibrati and glissandi that are executable on other fretless bowed stringed instruments.

The Kamanche is not capable of good production of harmonics. Its fundamental tones however are very rich in overtone content.

Pizzicati are very performable; scales are fine. The sound is very clipped and ‘banjo-like’. It has very good projection. One can be bowing a melody and pluck an open string with a left hand finger while pausing on a bowed note. This technique is very common.

Accenting generally takes the form of a note of shorter duration together with a bit more inflection than what would be derived by bowing legato. Strong staccato or staccatissimo does not work. Very hard bowing will compromise intonation. On the 1st string however a bit more staccato can work. The 1st string is louder and has a clearer tone than the others – it has good projective qualities.

Traditional ornaments include a quick upper mordent, sometimes executed on many notes in succession. It is called ‘kandakari’ (ch sp). There are other ornaments utilized to colour the notes. In listening to Kamanche playing and in consultation with the player himself the composer may learn about these in greater depth.

Asian/Middle Eastern Relatives of the Kamanche