Threading together the cultures of Asia and the world – from classical Chinese solos and intimate duets to multicultural ensembles that rock the house!

On December 2, 2017, two pioneering Vancouver ensembles – the Vancouver Inter-Cultural Orchestra (VICO) and Silk Road Music – weave their talents together to present THREAD, a joyful celebration of artistic innovation and musical friendships that span cultures, genres and decades. The concert is timed to mark Silk Road Music’s 26th year of creating and presenting Canadian music that fuses Asian sounds with Western/European and other world traditions. View promo video clips in English, French and Mandarin. 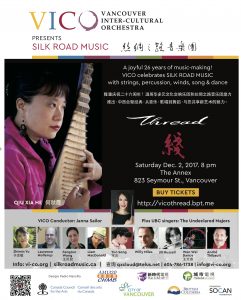 “Both Silk Road and VICO have been on the front lines of multiculturalism in BC and across Canada, fostering cross-cultural collaboration and communication through music,” says VICO Artistic Director Mark Armanini. “We see ourselves as showcasing a new kind of Canadian identity, one that is diverse and inclusive, yes, but organically so. It grows out of the concrete, painstaking, day-to-day work of building relationships between people and communities, and finding creative ways to talk to each other and work together.”

MORE ABOUT THE FEATURED ENSEMBLES

As recently as the mid-1990s, stereotypes of Chinese music as atonal and inaccessible dominated “mainstream” North Americans’ perceptions of this country’s sound. The idea of blending Chinese music with popular Western styles was seen as absurd, if not impossible. Silk Road Music changed all that. The ensemble pioneered the kind of Chinese-Western musical fusions that one now hears in acts ranging from The Sparrow Quartet to Yo Yo Ma’s Silk Road project.

At the heart of Silk Road Music is the unstoppable artistic vision of its founder, Qiu Xia He, a one-time music teacher at China’s Xian Academy of Music and professional pipa player with the Shaanxi Music and Dance troupe. While performing with the ensemble at the Vancouver Folk Music Festival, she made the dramatic decision to stay in Canada, and was welcomed in by a household of Irish musicians on Hornby Island. It was there that the seeds of her extraordinary cross-cultural musical experimentations were planted.

The Vancouver Inter-Cultural Orchestra (VICO), founded in 2001, was one of the first concert orchestras devoted specifically to performing new intercultural music on a grand scale. It is currently one of only a handful of such professional ensembles that exist in the world. The VICO brings together musicians and composers from many cultural and artistic communities in the Greater Vancouver area, including Chinese, Taiwanese, Japanese, Indian, Persian (Iranian), Latin and South American, Vietnamese, African, North American and European to create what has been described as “the United Nations of Music” (CBC Radio), and “music that sounds like Vancouver looks” (The Georgia Straight). The Vancouver Sun has called VICO “a world music super-group.”

VICO strives to be a fresh and relevant voice in the contemporary music of our city, our province and our country. The ensemble builds bridges of imagination, approaching diversity as a fascinating challenge and a creative call to action. Its work is to make connections, between performers and audiences of all ages and backgrounds, across the Lower Mainland, throughout Canada and the world; to create and perform orchestral music that transcends boundaries: cultural, social, political, geographical. Since its inaugural performance in 2001, VICO has developed and performed over 50 new intercultural pieces by ground-breaking Canadian composers. www.vi-co.org

The concert will include compositions featuring a pipa solo concerto, two opera singers with chorus and orchestra, a Chinese trio with orchestra, contemporary dance, and a seven-piece chamber ensemble interpreting Brazilian, Spanish and Jazz music.

The VICO and Silk Road Music extend heartfelt thanks to the following funders and sponsors, whose generous support makes THREAD possible: