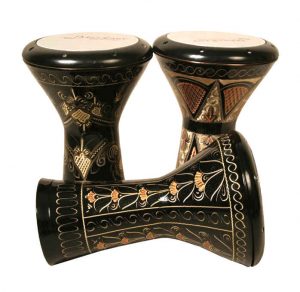 Darabuka is a goblet drum played all over the Arabic world. It provides rhythmic accompaniment for classical Arabic ensembles and orchestras as well as for popular musical forms such as belly-dancing. Its body is made from fired clay or metal, and the drum head of animal or fish skin, or more recently, synthetic materials. It is also known as a Dumbek, in imitation of its two primary sounds: ‘Dum’ (a low bassy sound) and ‘Tek’ (a biting high pitched sound).

The body of this musical instrument is made from fish or skin of the goat. Traditionally, it was made out of clay. According to most of the people, darabuka resembles the African Djembe. However, nowadays, Darabukas are seen to be consists of metals, such as, copper, brass, aluminium, whereas, the skins are seen to made out of plastic. But, sometimes in order to produce a deeper sound, natural skin is also used. While playing this instrument, the musician usually places the drum on his knee. However, in the past, while performing players use to place this instrument under the arm.

Darabuka – notations and example of realization (The Road to Kashgar)

Origin of the Darabuka