Ali Razmi is a gifted tar and setar player and composer who acquired his MA degree in music from The Art University of Tehran in 2006. He has performed throughout Iran, Azerbaijan, India, turkey, Canada and the US.  Ali’s music is used in the Sufi documentary by Amar Shebib in 2012 and he has collaborated with the Musica Intima choir which was distinguished as the best local choir in Vancouver in 2011 and 2012 by the great Canadian composer, Ed Henderson.  Ali has been a roster member of the Vancouver Inter-Cultural orchestra (VICO) since 2008. He has been involved in several workshops and compositions with VICO to promote Persian music among Western and Eastern musicians.

Ali Sajjadi studied setar and radif with Masoud Shaari and continued his training on the oud with masters, Hossein Behroozinia and Arsalan Kamkar. Ali has had a very successful career in both Iran and Canada.  He has played with the Hamsaz Ensemble directed by Masoud Shaari, the Khorshid Ensemble, the Mezrab Ensemble, and the Iranian national art institute Symphony Orchestra.

Hamin Honari is a Iranian-Canadian hand drummer who has specialized on the Persian hand drums tombak and daf. He has focused on adapting his drumming style and technique to accommodate many different genres of music. He has performed with the Dastan Ensemble, one of Iran’s most well-known Persian classical music ensembles, as well as with the Vancouver-based Vashaan Ensemble, and has accompanied many amazing musicians and singers, such as Salar Aghili, Parissa, Hossein Omoumi, Hossein Behroozinia, Saeed Farajpouri, and Itamar Erez.

Tar: an aft-fretted lute from Persia (Iran), which emerged in its present form in the middle of the eighteenth century. The long fingerboard has twenty-six to twenty-eight adjustable gut frets, and there are three double courses of strings. Its range is about two and one- half octaves, and it is played with a small brass plectrum.

Oud: A short necked fretless lute, known throughout the Arabic world, it typically has 5 double courses of strings tuned in intervals of a perfect fourth. It has a full, warm sound and its fretless neck allows for quarter tones and sliding effects. The European Lute derives directly from the Oud; in fact, the word Lute is derived from El Ud (the Ud).

Daf: a frame drum, traditionally covered with goat skin. In the hands of a professional it is capable of all kinds of intricate rhythms and a variety of timbres by utilizing finger work, closed and open sounds, slaps, and pitch inflections. It may have metal rings attached to the inside of the rim, which create a jingling sound as the skin is struck.

Asrar includes a setting of quatrains by Omar Khayyam:

Khayyam, if you are intoxicated with wine, enjoy!
If you are seated with a lover of thine, enjoy!
In the end, the Void the whole world will employ
Imagine thou art not, while waiting in line, enjoy! 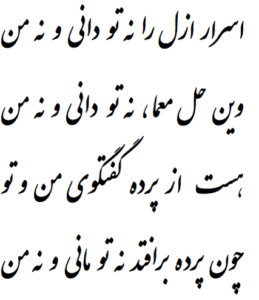 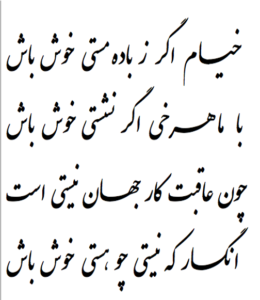