In May 2015, the Vancouver Inter-Cultural Orchestra and Laudate Singers celebrated more than a decade of artistic partnership with a concert of choral intercultural music titled MYSTICS & LOVERS. The next day, those same 50+ musicians gathered again to record two of the featured works on the programme, Ani Ma-amin (I Believe) by Moshe Denburg and Asheghaneh by Farshid Samandari. We are so excited to share the result with you at last!

“This orchestra (…) delivers the goods with such ferocity, even a metal head would stop and give pause to digest the extravaganza on parade here. This is the sitting down listening experience of the year and you don’t even have to be an egghead to get it. (…) A shining example of the passion it takes to keep classical music fresh”. –– MidWest Record

“Moshe Denburg’s “Ani Ma-Amin” and Farshid Samandari’s “Asheghaneh” might seem odd bedfellows. Brought together in this profound performance, however, they prove mutually illuminating.  (…) Even though there is no direct link between the two pieces, it is the ecstatic nature of both pieces – messianic and Sufist – that forms a common thread and an inspirational legacy for other composers should they be so inclined and so bold to put such inspirational music down on paper.” – Raul De Gama, Toronto Music Report 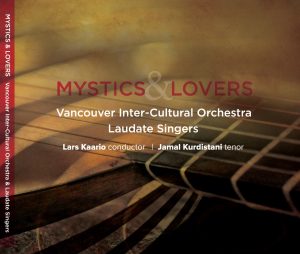 Mystics & Lovers features two major works by Canadian composers, both of which were first commissioned and premiered by the Vancouver Inter-Cultural Orchestra (VICO) and Laudate Singers several years ago: Ani Ma-amin (2002) by Moshe Denburg and Asheghaneh (2006) by Farshid Samandari.

Ani Ma-amin and Asheghaneh share central themes: both draw on the poetic best of many cultures to build bridges between them. Both strive for unity in diversity, expressing a longing for peace and understanding, and seeking connection between personal love and spiritual devotion. Both are major works that use the human voice and instruments from many countries (including traditional instruments from China, Vietnam, Iran and India as well as Western European/North American strings and winds) to highlight both the commonality and contrasting expressions of these deeply
human sentiments, communicated through centuries-old texts (by a 12th century Rabbi/philosopher in Ani Ma-amin and an 11th-c. Persian poet/philosopher in Asheghaneh) that still resonate with us today. 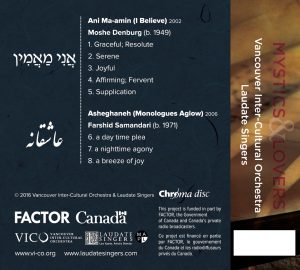 Through this recording, we are excited to bring these two important and innovative works to our loyal audiences as well as new listeners across Canada and throughout the world. We feel that it is an important part of our mandate to give the new Canadian works we commission a life beyond their performance in concert; to increase the profile of this music in Canada and beyond. We extend heartfelt thanks to everyone involved – orchestra members, singers, production team, administrators, funders, partners, and volunteers – for their support of Mystics & Lovers.

LAUDATE SINGERS, founded in 1995 by current Artistic Director Lars Kaario, is a chamber choir that strives to foster the development of professional musicians and enrich the cultural fabric of our community. A committed champion of Canadian choral music, Laudate Singers commissions and performs new Canadian works in addition to mentoring and nurturing young composers through a composer-in-residence programme. The choir has recorded six critically-acclaimed CDs: Christmas Journey, Songs of Heaven and Earth, A Baroque Christmas, Celtic Journey, Voices, Sax & Syn and Voice of the Tango. www.laudatesingers.com

JAMAL KURDISTANI (tenor soloist) was born in 1961 in Sanandaj, an Iranian of Kurdish descent. He has studied radif (Persian vocal music) with Ostad Ahmad Helli, Ostad Sediq Taarif and Ostad Mohsen Keramati. Jamal has performed with Dastan, Kereshmeh and Hamnavazan Ensembles, as well as in the Vancouver area with Saeed Farajpoori and Hossein Behroozinia. He has also appeared at the Safar Festival, and at the Indian Summer Festival with Coleman Barks; this was the first major Canadian exhibition by contemporary artists from the Middle Eastern region. Also an educator, Jamal has taught singing and voice pedagogy in Iran and Canada for more than 20 years.

MOSHE DENBURG grew up in Montreal, in a religious Jewish family. His musical career has spanned four decades and several continents: he has lived and studied music in Canada, the USA, Israel, India, and Japan. Since 1987 his compositions have reflected an ongoing commitment to the principle of intercultural music-making: bringing together the instruments and ideas of many cultures. He founded the VICO, a vehicle for the realization of his and other Canadian composers’ intercultural work, in 2001.

Known for music that deftly explores the cultural interconnections between Western Classical post-modernism and his Persian heritage, FARSHID SAMANDARI emigrated from Iran to Canada in 2001. Samandari’s mantra is “Unity through Diversity” — to this end his music synthesizes a broad spectrum of non-western sources to create a vocabulary that is entirely his own. His music has been performed extensively throughout Canada, Europe, and Asia. www.farshidsamandari.com