VICO Releases New Full-Length Album: In the Key of the World 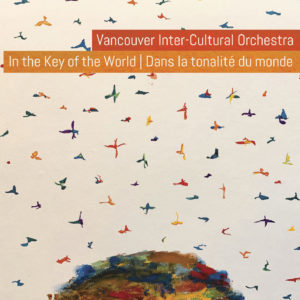 In a time when live orchestral performances are impossible, the release of new material in album form becomes even more meaningful – especially when the music in question provides a powerful demonstration of creative interconnectedness, communication and collaboration that spans cultures. The Vancouver Inter-Cultural Orchestra (VICO) is excited to announce the release of In the Key of the World, a full-length studio recording featuring music by Canadian composers Dorothy Chang, John Oliver, Moshe Denburg, and Farshid Samandari, performed by an ensemble of 28 musicians playing instruments from a wide range of musical traditions, including Chinese, Persian, Indian and European. In the Key of the World will be available via http://www.vi-co.org from June 4, 2020.

In the Key of the World, like the VICO itself, exists in several musical genres at once: world, classical, traditional. It’s fusion music on a global scale; music that transcends borders and breaks down barriers, throwing open the doors of contemporary classical music and forging a new path towards a truly diverse 21st Century Canadian music scene.

“Intercultural music has existed for centuries in most traditional cultures,” says VICO Artistic Director Mark Armanini. “The VICO has spent the past two decades developing a contemporary musical art form that draws on this history and brings the idea of “music as a universal language” to global fruition. We have developed a ground-breaking sound palette and repertoire that combines aural and written traditions, ancient and contemporary styles, and a huge variety of instruments (bowed strings, plucked strings, winds, brass, percussion) into one ensemble. The album offers a glimpse into the limitless creative possibilities of the intercultural orchestra, and the VICO is proud to present this music to the world as an aural offering of humanistic beauty and hope for a harmonious future.

Listen to and/or purchase In the Key of the World

The VICO extends grateful thanks to the following funders for their crucial support of this album: